Mets vs. Nationals Recap: The Mets do not go quietly into the night

Share All sharing options for: Mets vs. Nationals Recap: The Mets do not go quietly into the night

The Mets beat the Nationals by a final score of 9-7 in a wild game at Citi Field. If you love home runs and Wilmer Flores, then this game was for you. 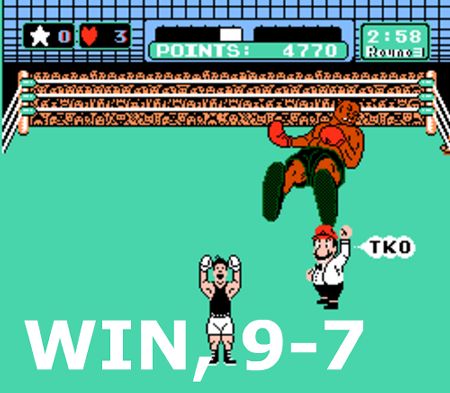 Okay, strap in for safety, people, because this is going to get nuts in a hurry. Things looked bleak for the Mets when the news broke before the ballgame about Matt Harvey. Wilmer Flores fans were even more unhappy when his name did not appear in the starting lineup. Fear not, for it was written in 2015 that a series against the Nationals in July must feature a Flores home run.

So how did things get to a point where the Mets needed Wilmer’s heroics? Let’s start at the very beginning, a very good place to start—or actually a not-so-good place to start for Bartolo Colon. Ben Revere hit a triple to greet Colon and came around to score when Daniel Murphy—of course—hit a shot to second that Neil Walker couldn’t field. With that hit, the Nationals were on the board and the game was only just getting warmed up.

Young Lucas Giolito got the start for the Nationals. He pitched well in his first game against the Mets, but last night, he didn’t achieve the same results. The Mets had runners on in both the first and second innings but were unable to score. They finally broke through in the third on a base hit by James Loney to even the score at one.

Unfortunately, the Nationals stormed right back against Colon in the fourth to take a 4-1 lead. They hit three solo home runs in the inning, one each by Bryce Harper, Clint Robinson, and Anthony Rendon.

Harper might have momentarily shushed the ballpark, but this game was far from over when the Met offense showed it had some fight in them in the bottom of the inning. Giolito would not make it out of this inning, as both Travis d’Arnaud and Jose Reyes crushed solo home runs off of him. The suddenly-hot Curtis Granderson followed with a double and moved to third when Giolito balked. Yoenis Cespedes brought him home to tie the game with a double to left. Neil Walker walked and Giolito’s night was done.

The Mets tried to be aggressive against Oliver Perez, and Cespedes and Walker completed a double steal. Loney left them stranded, though, when he popped up to second to end the inning.

Colon came out for the fifth, but he would not end the fifth. Perez and Revere hit back-to-back singles to lead off the inning. Jayson Werth replaced Revere at first on a fielder’s choice, which set up first and third and one out for Murphy, who hit a ground ball that was originally ruled to be a double play, but since he was clearly safe at first the Nationals challenged and the call was overturned. Werth did slide past the bag at second, but the Chase Utley rule was not applied so the run counted. The Nationals retook the lead 5-4.

The inning spiraled from there for Colon. Harper and Wilson Ramos both singled which brought home Murphy to extend the lead to 6-4. That was it for Colon, who only went 4.2 innings and gave up six runs. Jerry Blevins came in to replace Colon and walked the only batter he faced before Hansel Robles came in to bail the Mets out of the inning.

Perez was left in to face the bottom of the Mets’ lineup. Asdrubal Cabrera got things started when he singled to center. Brandon Nimmo had a nice at-bat against the lefty and followed suit with a single. Travis d’Arnaud struck out, but Terry Collins then tapped Wilmer Flores to pinch hit. It didn’t take long for Wilmer to add to his folk hero status. One pitch from Perez was all it took to turn the game around. Flores turned on it and sent it to the second deck in right to give the Mets their first lead of the night, a lead they would never relinquish.

Chants of "Wil-mer Flor-es" were first heard on a July night against the Nationals in 2015 and here they were again. This home run was not a walk-off, and so Wilmer was able to acknowledge the ecstatic crowd with a curtain call.

Asdrubal Cabrera gave the Mets a cushion in the sixth when he, too, hit a home run to make it 8-6. When the night was over, all three Mets shortstops would have a home run next to their name.

With Jerry Blevins having already been used, Antonio Bastardo was given the seventh inning. Murphy’s revenge knows no limits, so he hit the eighth home run of the game to cut the lead to 8-7. This was also a record-breaking home run, as the eighth home run is the highest total of home runs hit at Citi Field.

The night ended badly for Bastardo when he threw away an easy ground ball at first. That prompted Terry Collins to go to Addison Reed who ended the inning when Rendon struck out.

The Mets again extended their lead in the eighth when Neil Walker drove in Granderson to again give the Mets a two-run lead.

Jeurys Familia came in to nail down the game and looked incredibly shaky. He walked Werth and Murphy hit a ball that forced Asdrubal Cabrera to make an incredible diving stop. Cabrera got Werth at second but there was no chance to get Murphy at first....until Werth was called for interference! The Chase Utley rule that was not applied in the fifth was now applied in the ninth, much to the chagrin of Werth. That seemed to awaken Familia who battled back to strike out Harper to win the game and ignite the crowd. 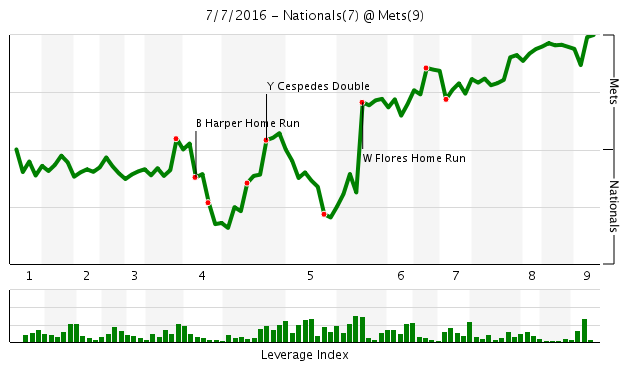