Mets vs. Nationals recap: Everything is not awesome

The Mets lost a game and their two best players last night.

Share All sharing options for: Mets vs. Nationals recap: Everything is not awesome 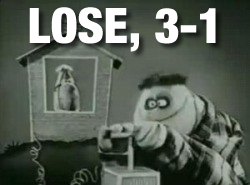 Despite coming into the day knowing that season-ending surgery sounded pretty likely for Matt Harvey—and it was—the Mets were coming off a wild comeback win over the Nationals on Thursday night. Losing Harvey, mostly because of the slim prospect of Harvey returning to his old form sometime this year, hurt. But replacing his production thus far didn’t seem like an overwhelming task since he had understandably struggled.

Syndergaard gave up a two-run home run to Clint Robinson in the third and a run-scoring double to Daniel Murphy in the third. The latter play was the one on which Cespedes strained his right quad, an injury that at least doesn’t sound incredibly dire. Syndergaard wasn’t at his best, but he wasn’t exactly getting shelled. But in the fifth inning, his velocity dipped significantly.

After the game, Syndergaard said he wasn’t feeling any pain. The Mets called the injury “arm fatigure” and insisted it had nothing to do with his elbow. They put that on the scoreboard, briefly, late in the game, a last-minute assurance to everyone leaving that things might be okay.

There was almost a comeback again, even after all of those bad things happened. Asdrubal Cabrera hit another home run, a solo shot into the Coke Corner, to make it 3-1 in the fifth inning. Stephen Strasburg didn’t allow anything else through seven innings, but the Mets got a double from Wilmer Flores, who came into the middle of the game as part of a double-switch, and an infield single from Jose Reyes to put runners on the corners with nobody out.

Thanks to another great multiple-inning performance by the Mets’ bullpen, they had a chance there. But Oliver Perez got Curtis Granderson to ground out, Reyes didn’t so much as attempt to steal second base, and Juan Lagares—who was hitting in Cespedes’s spot in the lineup—grounded into an inning-ending double play.

Excuse me for going all stereotypical-baseball writer here, but I’ll be listening to the chorus of this song on loop for a bit.