Logan Verrett put the Mets in a hole early, and they did not come back.

Share All sharing options for: Mets vs. Padres recap: Comeback falls short as Mets fall below .500

The Mets lost to the Padres 8-6 on Friday night, but considering how the game started, that score could have looked a lot worse. One game after Terry Collins went on a post-game rant, the offense came to life but the decision to stick with Logan Verrett, despite multiple poor outings, is what doomed this game right from the start. 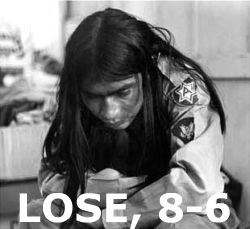 Travis Jankowski greeted Verrett with a single to lead off the game. Wil Myers followed with a walk, and both runners moved up on a passed ball by Travis d’Arnaud. Yangervis Solarte walked to load up the bases with nobody out. With one out, Ryan Schimpf hit a grand slam to give the Padres a 4-0 lead. Jabari Blash made it back-to-back home runs when he followed with a solo shot of his own. The Mets were down 5-0 before ever coming up to bat.

Even though d’Arnaud had the passed ball in the first, he had a decent day overall. In the second, he threw out Myers on an attempted steal of second. In the bottom of the second, he cut into the Padres’ lead with a two-run home run to make the score 5-2. d’Arnaud would finish the game going 3-for-4 with two runs and two RBIs.

Verrett took the mound in the third and departed the game before the inning was over. Alex Dickerson doubled with one out, and Schimpf tagged Verrett for another home run to make it 7-2. Christian Bethancourt ended Verrett’s night with a home run with two out to extend the lead to 8-2.

The newly-recalled Seth Lugo was the first one out of the bullpen on what turned out to be a fantastic night for the Mets’ bullpen. They put up all zeroes and combined to retire 19 batters in a row. Lugo pitched 2.1 innings, Erik Goeddel struck out the side in his inning, and Hansel Robles pitched the final three innings and struck out three.

The work of the bullpen allowed the offense to try and claw its way back into the game. In the fifth, with two-on and two out, Jay Bruce singled off starter Paul Clemens to bring home Curtis Granderson and cut the lead to 8-3.

In the sixth, the Mets made it a game and further chipped away at the lead. d’Arnaud led off the inning with a single. What followed was a scary moment, as Alejandro De Aza was struck on the cheek with a pitch. He stayed in the game and ran to third when Matt Reynolds doubled. d’Arnaud scored on the Reynolds hit, and it was 8-4. Ty Kelly followed Reynolds’ double with a single, and De Aza came home to make it 8-5.

With runners on first and third and nobody out, Curtis Granderson continued his struggles with runners in scoring position and struck out. Wilmer Flores pinch-hit and grounded out to bring home the third run of the inning to make it 8-6, but that ended up being the final score.

As good as the Mets bullpen was, the Padres’ bullpen also settled down after that inning, and they didn’t allow another baserunner in the final innings.

So with that loss, the Mets are below .500, and the fifth man in the rotation is still a question mark. Zack Wheeler won’t be returning any time soon, which means the Mets must find someone to fill that spot—a spot they have gotten very little production out of all year. Matt Harvey was 4-10 with a 4.86 ERA and Logan Verrett is 3-8 with a 5.36 ERA, making them a combined 7-18 with a 5.11 ERA. Jon Niese will get his chance next, but if the Mets have any hope of contending, they need to find someone who is capable enough to give this offense a chance to win, and right now, those numbers are not getting it done.