San Francisco was the only team as cold as the Mets coming into this four-game series. When push came to shove, you were better off watching shot-put highlights.

Share All sharing options for: Mets vs. Giants Recap: Mets drop first heat of the Struggle-lympics, 10-7

Before the Mets’ 10-7 loss to the Giants on Thursday, Sandy Alderson told the media that Terry Collins would be the manager for the foreseeable future. This was meant to show solidarity, strength, confidence. 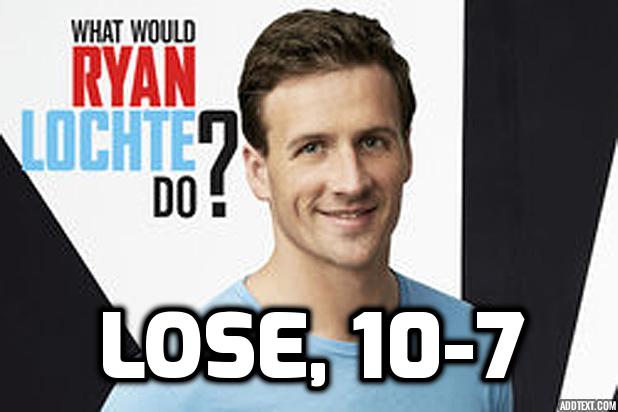 It was as if he were saying to the TV-remote-wielding public: “The Olympics will come and go, but we will still be here, and we will have the same manager, and you really hope to see us make a glorious comeback into contention so you might as well continue to watch our metaphysical wrestling and our run at hurdles and our 162-game marathon instead of the actual activities that inspire such metaphors.”

If you did tune in to the Mets’ latest loss—their ninth in the last 13 contests, and 15th in their last 22—you wouldn’t be blamed for switching over to the Olympics in due course, even though few (if any) events were still taking place live. This would mean you were likely watching an Olympic highlights show on a loop. Still, perhaps a wise choice: there would be so much more winning involved in that scenario.

Because this was the type of game where the Mets would stake Jacob deGrom to a 4-0 lead on a Justin Ruggiano grand slam, and he then gives that lead up in the same inning, courtesy of a home run to the opposing pitcher. Yeah, it was Madison Bumgarner, he of 14 career home runs, but still.

Because this was the type of game where Ty Kelly drills a key two-run triple and scores to help get the Mets back in the game at 8-7 and all you can do is ruefully think of how this is likely to result in more Ty Kelly at-bats.

Because this was the type of game where T.J. Rivera scorches a gapper that has the chance to tie the game in the sixth, but instead the ball snowcones in Angel Pagan’s mitt and stays there to end the inning. Because of course it does. In turn, you wonder why the Mets couldn’t have gotten a prospect for a guy like Pagan instead of a year each from two guys that have both now been out of the majors for a while now.

Because this was the type of game where the highest-leverage at-bats late in the game of course find Ruggiano and Kelly, and you almost can’t blame Terry Collins for failing to pinch-hit for either of them despite platoon-split and experience deficiencies. In the seventh, Ruggiano—3-for-3 to that point—came up with two on and one out against a right-hander—against whom he is .246/.311/.383 during his career—and accordingly struck out. Two batters later, Kelly came up with the bases loaded and meekly grounded out, in what would be the Mets’ last best threat. But which hideous slump should Collins have selected off the bench, among Alejandro De Aza, James Loney, and Curtis Granderson?

Because this was the type of game where Jay Bruce takes the hat trick with three strikeouts and dribbles a meaningless infield single in the ninth to finish 1-for-5 and sees his batting average as a Met improve.

Because this was the type of game where the final score wasn’t the worst news of the evening; instead it was the revelation that Steven Matz would not make his scheduled start on Friday because of a shoulder issue. Of course Matz’s health is the main concern, but it also means that New York may play Friday two players short, given that Seth Lugo is taken from the pen for the emergency start while Neil Walker has yet to recover from lingering back pain.

Well, if you need motivation to watch the Mets Friday, they will have Yoenis Cespedes and Asdrubal Cabrera back (assuming they don’t miss their flight), the Mets have scored 39 runs in their last seven contests (although they have won only three of those), and today’s Olympic highlights will include speed walking.

Truthfully though, it would be nice if the Mets took after that event, and got where they are going—whichever direction that is—with a little more haste.