Despite a thrilling comeback, the Mets coughed up the lead and ultimately lost.

The Mets’ trade deadline additions weren’t available yet when the team hosted the Yankees last night to begin this week’s four-game Subway Series, and the Mets lost in excruciating fashion. 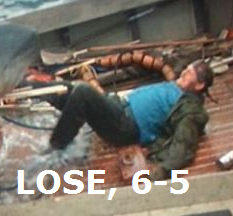 The game got off to a pretty good start, as the Mets were able to throw out Brett Gardner at the plate when he attempted an inside-the-park home run in the first at-bat of the night. And Wilmer Flores hit a solo home run off the left-handed CC Sabathia in the second inning.

But the Yankees tied the game on a wild pitch by Logan Verrett in the fourth and took the lead with a couple of runs in the fifth. The Mets responded with a run in the bottom of that inning when Michael Conforto hit a long double to score Brandon Nimmo, who hit a pinch-hit single on the day he was nearly traded to the Reds for Jay Bruce.

In the sixth, Matt Reynolds hit a three-run home run to give the Mets the lead in thrilling fashion, and with Erik Goeddel having thrown a scoreless top of that inning and Hansel Robles following up with a scoreless frame of his own, things seemed to be well under control.

Terry Collins turned to Jerry Blevins to start the eighth, however, and he walked Brett Gardner before striking out Jacoby Ellsbury before he was replaced by Addison Reed. And he struck out Mark Teixeira, gave up a single to Brian McCann that put runners on the corners, and threw a wild pitch that allowed pinch runner Ronald Torreyes to advance from first to second. That was important because Didi Gregorius hit a weak bloop single to left field that fell in and easily scored both runners to tie the game.

The Mets went down in order in the eighth, and after Jeurys Familia threw a scoreless top of the ninth—scoreless thanks in large part to a spectacular catch by Curtis Granderson—the Mets didn’t score in the bottom of the ninth, either.

Seth Lugo, the last pitcher in the Mets’ bullpen, took over in the tenth and loaded the bases with nobody out. He only allowed one run on a sacrifice fly and escaped the inning after that, but that was all the Yankees needed to win.

Dellin Betances, the lone elite relief pitcher left in the Yankees’ bullpen after the team wisely traded away Aroldis Chapman and Andrew Miller before the non-waiver trade deadline, wasn’t even his dominant self. James Loney led off with a double, and the Mets chose to have Matt Reynolds sacrifice bunt him to third base. Betances hit Alejandro De Aza with a pitch, and De Aza was running as Rene Rivera hit a ground ball back to the mound. That kept the game alive, but Granderson whiffed to end the game.

As tight as things are in the Wild Card race, games like these are the ones that could come back to haunt a team. The Marlins lost last night, too, which leaves the Mets 2.5 games back of the second Wild Card spot in the National League, but the Nationals won, leaving the Mets 7.5 back in the division. There’s still plenty of time for either of those spots to be attainable, but the Mets can’t afford to lose games like last night’s many more times if they’re going to make the postseason this year.