You would think that when a pitcher gets removed with four runs allowed in seven-plus innings, it’s pretty rare that they get an extended ovation that only grows louder instead of gently petering off, but 43-year-old Bartolo Colon put on quite a show in last night’s 9-4 win. We’ve all learned not to put anything past Big Sexy, and he proved why once again in topping the Phillies in every way possible. 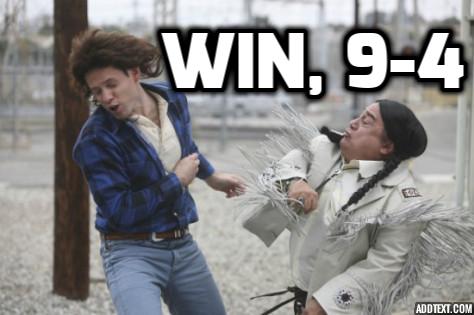 When the Mets’ offense is enjoying itself, applause tends to come easier, and New York has now averaged 5.6 runs a game over their last 14 games. They got on the board immediately in familiar fashion against Adam Morgan, who was the Phillies’ starter for the Mets’ eight-home run outburst in Philly last September. Jose Reyes and Asdrubal Cabrera whacked back-to-back big flies to lead off the game for only the second time in team history, continuing both players’ torrid return from the DL—Reyes is now hitting .333/.400/.481 in 14 games and Cabrera is at .393/.400/.750 in the last seven contests.

Meanwhile, Big Sexy was cruising, allowing no hits (a.k.a. “base-knock blocking”) until the fifth, when Odubel Herrera laced a double. After a two-out intentional pass to journeyman Peter Bourjos and his .679 OPS, Colon’s opposite number Morgan smacked an RBI single the opposite way to draw Philadelphia within 2-1.

This insult seemed to rouse Bartolo at the bat as he led off the bottom of the fifth, setting up the following three-act dramedy, tentatively titled “Run, ‘Tolo, Run.”

Prologue: Colon’s first at-bat in the second inning provided a delicious foreshadowing. With a runner on first, he had looked bad on a whiffed bunt attempt, and so decided to play to the crowd and against typecasting by taking vicious rips instead. Despite oohs from the crowd, his Colonian hacks came up empty, and the curtain is drawn on his strikeout.

Act 1: With renewed vinegar, our hero worked the count to 2-2 in his second at-bat in the fifth, when Ronnie the Prognosticator revealed that “Now Bart is going to swing real hard.” To everyone’s delight, Colon sent a laser into left-center that skipped all the way to the wall. Bartolo, assuming he was going to coast for a single, instead improvised sleight-of-foot in gamboling around first while Ryan Howard asked if he needed a drink of water as he passed by. Colon pranced into second with enough time to spare to give second-baseman Cesar Hernandez a shoulder massage. Really, all those things actually happened. Anticipation flitted around the building.

Act 2: Gary oped with a soliloquy, paraphrasing Bart as having once declared, “I don’t like to run”. Bartolo proved the disembodied voice a soothsayer as he failed to score from second base on a double by Reyes which ricocheted off the right field stands in foul ground. Instead, Bartolo stopped at third without blushing. (Evidently this event isn’t as common as might think, this being the Mets: this was the 12th time in team history that a double with RISP didn’t result in a run, but the first since 1973, according to Baseball Reference.)

Onlookers erred toward the side of humorous reception of this display, but sensibilities were challenged yet further when Colon bluffed a break home on a grounder to third and then didn’t break at all on a dribbler to second with the infield back. So now with two out, our heroes needed a bit of luck when with a 2-0 count Neil Walker sent a lazy foul pop down the right field line. Ryan Howard might have gotten to it if he hadn’t stopped for a drink of water (he really cares about his hydration); instead, the ball fell, allowing the drama to build in what became a nine-pitch at-bat. Walker lived up to his birthright by walking to load the bases and ratchet the tension further.

Act 3: Enter strongman Wilmer Flores, wielding a blade that will not yield to any man who was born left-handed. Not on the stage for more than a pitch, Wilmer summarily disposed of a feeble slider over the left-center wall for a grand slam. Colon, thanks to the support of his friends, now merely had to walk home on the right side of a 6-1 lead. Meanwhile, Wilflo defends his rightful stake on the lands of first base with 10 homers in 93 at-bats against lefties on the year, along with a .344 average and 1.091 OPS. Joyousness and intricate handshakes and pelvic gyrations and smiles abounded as Colon’s adventures on the basepaths come to a exultant close...

Epilogue: ...or do they??!? Colon smokes a single in the sixth, advancing Travis d’Arnaud to third. d’Arnaud then tries to score on a fly ball to left, and a jarring collision at the plate results in a put-out, and...Bartolo is still at first base??!? This reminder that ‘Tolo does not employ locomotion unnecessarily was not lost on Cabrera, who slew his second homer of the game (this from the left side), affording Bartolo a merry jaunt through the daisies once again, this time with an insurmountable 9-1 advantage.

A sequel to this smashing success could star Colon on the long-end of a platoon with Jay Bruce, who took the golden sombrero and has now struck out in seven of his last 10 at-bats. Perhaps Bruce could pinch-run for Colon, as he may well be the fastest guy on the team for all anyone knows. Yet the widespread concern about Bruce is evidently real, for if you Google ‘Baseball Reference’ the first subheading is ‘Jay Bruce’. Many seem to be on the hunt for answers as to whether he could possibly suck this much.

But for now, Colon did his appointed duties well enough, allowing but two hits through seven before getting roughed up for four straight hits and three runs in the eighth. Which brings us back to the applause for Bartolo, which all may agree was rightly earned, by going above and beyond his station and its duties once again.