Mets vs. Phillies recap: Home runs for all

The Mets put on a show against the Phillies on Saturday night.

Share All sharing options for: Mets vs. Phillies recap: Home runs for all

Close games are exciting, but watching the Mets score runs at will and blow out a bad team in the midst of a playoff push is pretty entertaining, too. Last night at Citi Field, the Mets hit four home runs, scored twelve runs in total, and gave up just one run to the lowly Phillies. 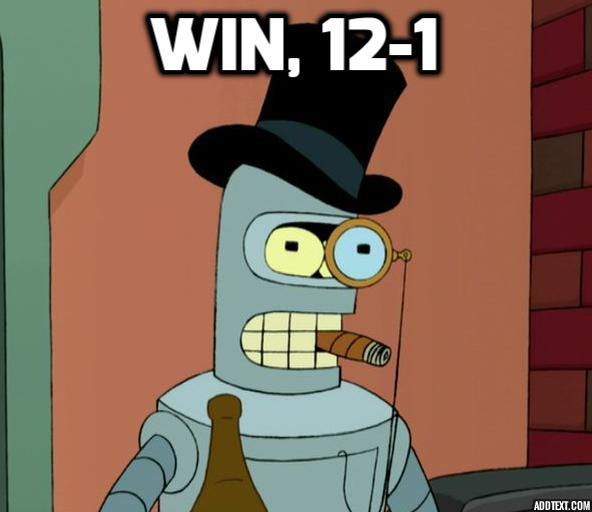 Philadelphia actually held the lead briefly in the game, as number eight hitter Freddy Galvis hit a solo home run into the field level seats in right field, the Phillies’ first hit of the game. After Bartolo Colon had flirted with a no-hitter for a few innings on Friday night, it didn’t seem outrageous that Syndergaard might be able to do the same, even though it was still just the third inning. By the time his night was done, he had allowed only two hits, struck out seven, walked two, and allowed only that one run.

That lead was erased in the bottom of the third when Asdrubal Cabrera—who has been on fire lately—hit an opposite-field, two-run home run to give the Mets the lead. In the fourth, Syndergaard just missed hitting a home run himself as he doubled to deep center field, and later in that inning, with runners at the corners and two outs, Yoenis Cespedes fouled off several pitches before hitting a rocket of a home run to left field that gave the Mets a 5-1 lead. It’s tough to overstate how good he has been since joining the Mets.

That lead was pretty comfortable given the context of the game, but the Mets really turned it into a blowout in the seventh. Alejandro De Aza doubled in a pair of runs, and with runners on second and third, the Phillies intentionally walked Curtis Granderson to load the bases. They got one out as Rene Rivera flew out harmlessly to center field, but pinch hitter Kelly Johnson hit a grand slam, the Mets’ second of the weekend, to put them up 11-1. Like Cespedes, Johnson has flourished in a Mets uniform, especially this year. He’s hit .293/.358/.528 with eight home runs with a 137 wRC+ since the Mets re-acquired him.

And if all that weren’t enough, Neil Walker led off the bottom of the eighth with a solo home run to give the Mets a perfect dozen runs on the night. Jim Henderson threw a perfect eighth with one strikeout, and Josh Smoker allowed a single but struck out two in a scoreless ninth.

Games against the Phillies are games the Mets absolutely should win, but it’s still great that they did. And last night, the Giants, Cardinals, and Marlins all lost their games, which means the Mets are 2.5 games back of the Cardinals for the second wild card, 4.0 games back of the Giants for the first one, and one game behind both the Pirates and Marlins. They’ve won six of seven, and in doing so, they’ve very much kept their season alive.