Mets vs. Yankees recap: Every facet struggles in loss to Yankees

No big hits were found in the Bronx.

Share All sharing options for: Mets vs. Yankees recap: Every facet struggles in loss to Yankees

The Mets lost to the Yankees by a final score of 9-5 by putting in an underwhelming performance in every aspect of the game.

Let’s examine each area. Defense? Not good. Pitching? Poor. Hitting? Okay. Runners in scoring position? Do not pass go. Do not collect $200. 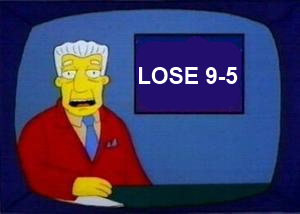 Before the game, manager Terry Collins wanted to focus on offense so Wilmer Flores got the start at short. As NFL MVP Cameron Newton says, “hindsight is always 50/50,” and yes Collins did have a 50% chance at getting this one right since his only other option was Matt Reynolds. Unfortunately, that other 50% looms large since Flores had a night to forget both at the plate and in the field.

The game started off in promising fashion, when for the second night in a row a Mets center fielder hit a home run. Tuesday night it was Alejandro De Aza with the big blow, and Wednesday it was Curtis Granderson who led off the game with a blast off starter Chad Green. Neil Walker and Yoesnis Cespedes followed with singles and Jay Bruce walked to load the bases. James Loney came through with a hit, but only Walker was able to score.

So with the bases still loaded and nobody out, the Mets again failed to score another run even with a rookie starter on the ropes. Michael Conforto got his night started with a strikeout, and Flores followed with his first inning-ending double play of the evening to end the inning and the rally.

Steven Matz took to the hill in the bottom of the inning and the 2-0 lead quickly evaporated. Rob Refsnyder singled with one out and Mark Teixeira walked to make it first and second with one out. The Yankees are last in the AL in many offensive categories and struggle with runners in scoring position. Tonight they had no such issues as Chase Headley doubled home both runners to even up the score. Then with two out, Didi Gregorius also doubled to bring home Headley and give the Yankees a 3-2 lead.

The Mets were able to tie it up in the second when Teixeira got confused on a ground ball by Kelly Johnson and fell down at first base. Johnson turned this into a double and Rene Rivera brought him home with a single. Granderson walked but again that set up a double play and this time Neil Walker was the bearer of two outs. The Mets just never could deliver the knockout blow despite having Green on the ropes early on.

The Yankees did deliver a massive blow in the bottom of the inning when Mark Teixeira hit a three-run home run off Matz with two out. This was Teixera’s first home run from the right side of the plate this season.

The Mets attempted to get back in it in the third when Jacoby Ellsbury made an error on a ball struck by James Loney. He was able to take second on the play with only one out. Michael Conforto walked but Flores ended the inning with his second double play of the night.

Matz for his part, did not give in and ended his night strong. The only other trouble he ran into is when he hit Teixeira with a pitch, which upset the Yankees first baseman. The benches cleared but nothing came of it as Rivera sent the Yankee with the hurt feelings on his way to first. Sixes were wild for Matz when he finished the night going six innings, giving up six runs, six hits, and striking out six.

In the top of the seventh, Granderson, one of the few bright spots of the night, walked leading off the inning. Walker bunted but Luis Severino couldn’t pick it up cleanly and the Mets had the first two runners on. Next up it was an error by Headley on a Cespedes ground ball that would again load the bases.

Jay Bruce was leading the league in RBIs when he came over from the rebuilding Reds. So how would he fare in this prime opportunity with his new team? He did as the Mets do and struck out. Loney grounded out to cut the lead to 6-4, but with the tying runs in scoring position Conforto also struck out. He finished the night with five men left on base.

After the offensive futility in the top of the seventh, pitching futility was on full display in the bottom of the seventh. Hansel Robles hadn’t allowed a run in a month but that all changed. He allowed the first two hitters to reach second and third and Refsnyder hit a sacrifice fly to make it 7-4. Teixeira and Headley both walked, and while Teixeira was on second, Robles became convinced he was stealing signs. Robles became distracted but did not receive help when Flores was unable to throw out Starlin Castro on a ground ball as a run came home.

That was it for Robles who was replaced by Josh Edgin. This would be Edgin’s first appearance since undergoing Tommy John surgery and it would last only one batter. He walked Gregorius to force in a run and make it 9-4. Erik Goeddell finished the inning and worked around a Flores error in the eighth. For the night, the Mets used four pitchers and three of them allowed runs to score.

Tyler Clippard got the ninth for the Yankees and Neil Walker added on a run to continue his hot hitting with a solo shot to right.

This was far from a clean game by the Yankees. They made two errors and their starting pitcher only lasted 3.2 innings. However, they were able to capitalize in key situations whereas the Mets just can’t get out of their own way when a team sets them up for big innings.

With Yoenis Cespedes ending up on the disabled list after the game, it is fitting to borrow a quote from a former Met and Yankee when I say it is getting late early for this 2016 ballclub.