The Mets continued their struggles in a loss to Detroit on Friday night.

The Mets dropped the opening game of the series behind Noah Syndergaard in Detroit on Friday night, falling to the Tigers by a score of 4-3. 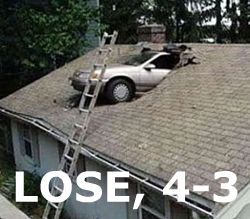 The Tigers struck early against Syndergaard, scratching out a run in the first inning after Ian Kinsler singled, stole both second and third base, and then scored on a ground out. It was a painfully familiar sequence of events for Syndergaard, who has struggled with handling baserunners all season. The Mets had a chance to answer in the top of the second inning after getting the first two runners on base against Justin Verlander, but the worst team in Baseball at hitting with runners in scoring position could not push either one of them across. The Tigers still led 1-0.

Syndergaard would settle down for a short while, getting through the second and third innings with ease. Verlander was cruising into the top of the fourth inning, but after Jay Bruce walked, Kelly Johnson came up two batters later and ripped his sixth home run of the season—and fifth with the Mets—into the right field seats. The two-run shot gave the Mets a 2-1 lead.

Unfortunately, that lead was extremely short-lived. Two batters into the bottom of the fourth, Noah Syndergaard would hand the lead right back to Detroit, giving up a mammoth two-run homer to Victor Martinez to put the Tigers back in front, 3-2. But the Tigers wouldn’t stop there, as the next batter, J.D. Martinez, doubled, Nick Castellanos walked, and even after Justin Upton almost killed the rally with a double play, the Tigers were still able to push across one more run on a James McCann single to extend the lead to 4-2. Syndergaard would finally get out of the inning by getting Jose Iglesias to ground out to first base, but the damage was done.

Justin Verlander would have his way with the Cespedes-less Mets lineup from there, only allowing one more baserunner for the rest of his outing which concluded after the sixth inning. The 33-year-old continued his career resurgence with another solid outing, allowing just the two runs on four hits and one walk, while striking out nine.

Noah Syndergaard looked more like himself after that fourth inning, and was able to get through the fifth and sixth innings unscathed. He finished the night having also gone six innings, but allowing two runs, seven hits, and two walks. He struck out seven.

Erik Goeddel would take over for the Mets in relief and picked up the slack by firing two scoreless frames in the seventh and eighth innings. That was to almost no avail, though, as the Mets offense continued to be hapless against Detroit’s bullpen, as two former-Yankees, Shane Greene and Justin Wilson, would both pitch perfect innings in the seventh and eighth, respectively.

That would set the stage for the former Mets closer, Francisco Rodriguez, to close it out for the Tigers. Neil Walker continued his hot streak by leading off the inning with a single. A wild pitch and two ground outs would get him around to score, but it was not enough as K-Rod sealed the game, getting Kelly Johnson to ground out, completing the Tigers’ 4-3 victory. The Mets still have not won back-to-back games since July 6-7, almost a full calendar month.