Mets vs. Tigers recap: deGrom was strong, Walker was stronger

The Mets greatly benefited from a baserunning blunder.

Share All sharing options for: Mets vs. Tigers recap: deGrom was strong, Walker was stronger

The Mets, still in the Wild Card hunt, desperately needed a win yesterday, both for reasons involving the National League standings and mental, and they got one, thanks to some late-inning heroics by Neil Walker and a solid pitching performance from Jacob deGrom. The 3-1 victory was a hard-fought one. Despite the win, the team still is looking rather anemic offensively. Aside from Michael Conforto’s solo home run in the seventh inning, the Mets only hit three singles in their first eight innings, making Tigers starter Anibal Sanchez look far less hittable than his 6.27 ERA entering the game made it seem. Sanchez had a good day, but he was helped along mightily by the Mets’ bats rolling over pitch after pitch.

Jacob deGrom started for the Mets, and had his fastball command working early, turning three double plays in the first six innings. The Tigers managed to collect seven hits against deGrom, but all were singles. deGrom started to get into trouble in the seventh, where he gave up two soft singles and a walk, leaving the game with the bases loaded.

Jerry Blevins replaced him, and did his job by inducing weak contact from pinch hitter Ian Kinsler, but the BABIP gods were not with the Mets today, and Justin Upton scored, tying the game. Addison Reed came in and got the final out of the seventh, sticking around for the eighth inning, escaping trouble when J.D. Martinez committed some truly atrocious baserunning.

That proved to turn the tide for the Mets, who capitalized in the top of the ninth inning. After former Met Francisco Rodriguez hit Alejandro De Aza in the hand to start the inning, Neil Walker smacked a two-run home run to right-center field to give the Mets the lead. De Aza had his hand x-rayed after the game and everything was all right.

Jeurys Familia notched his 39th save of the year, striking out the side, with a single in between the second and third strikeouts.

The Mets travel home to face Arizona to begin a three-game set with the Diamondbacks at Chase Field Tuesday night, with Steven Matz set to go up against Zack Greinke. 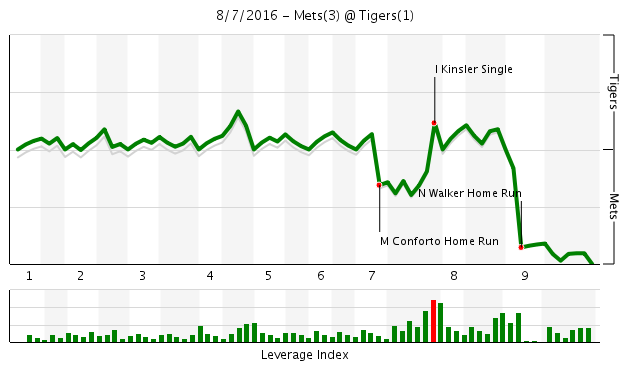