The Mets clinched the series over the Marlins on Wednesday night, winning by a score of 5-2. Bartolo Colon started for the Mets opposite rookie Jake Esch, who was making his major league debut. The scheduled starter for Miami was the more-fearsome David Phelps, but the ex-Yankee was placed on the disabled list with an oblique strain this afternoon. 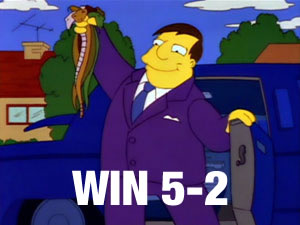 The Marlins kicked off the scoring in the top of the second. Ichiro Suzuki led off the inning with a single to right field. He then reached second when Colon committed a throwing error on an attempted pickoff. The sloppy defense continued when J. T. Realmuto hit a dribbler down the third base line. Jose Reyes tried to make a difficult barehanded play, but made another throwing error on his throw to first.

The Mets responded quickly in the bottom of the inning. Curtis Granderson drew a walk and Wilmer Flores hammered a home run down the left field line to give the Mets a 2-1 lead. The Mets threatened to add more runs in the inning as Jay Bruce and Travis d’Arnaud singled, but Bartolo Colon grounded into a double play to end the threat.

After the second inning, the offenses quieted until the sixth inning, when Christian Yelich hit an opposite field home run. This home run was quite reminiscent of the homer he hit off Seth Lugo last night. The offensive futility continued until the bottom of the eighth inning, when the Mets faced Marlins closer A. J. Ramos.

Ramos got off to a poor start, allowing a single to Cespedes and a walk to Granderson. The walk brought moans from Keith Hernandez, who was appalled by Ramos’s repeated use of off-speed pitches. Ramos did not seem to have much of a choice in the matter, as his fastball was sitting around 89-90, below his career average of 92.5 MPH. Ramos managed to retire Wilmer Flores and Jay Bruce, but allowed a two-out walk to d’Arnaud. Kelly Johnson came to the plate and worked a full count before lacing a double down the right field line to clear the bases. Staked to a three-run lead, Jeurys Familia pitched an easy 1-2-3 ninth inning and earned his place in the record books for most saves in a single season by a Mets pitcher with 44. Considering that we have another month-plus of season left, Familia looks to hold the record for a long time.

As has been a theme of the Mets this season, the boys in blue left quite a few men on base today. Wilmer Flores batted in the third inning with two on and two out and hit a line drive that was caught by Marcell Ozuna. Though Ozuna was injured on the play, he successfully traded his bat for a run. In the fourth inning the Mets loaded the bases with three singles and no one out. Bartolo Colon promptly crushed Mets hopes by grounding into a 5-2-3 double play, his second double play in two innings. Jose Reyes then grounded out to second base to end the threat. I was terrified that I would have to add the eighth inning to this paragraph, but Kelly Johnson is awesome.

With this win, the Mets achieved a 15-14 record in August. This was their first month with a winning record since April, when they went 15-7. The victory was even more important because it came against the Marlins, a close Wild Card competitor. By leapfrogging the Marlins—coupled with a Cardinals loss to the Brewers—the Mets are just 1.5 games back of St. Louis for the second Wild Card spot.