Asdrubal Cabrera’s walk-off homer capped a comeback 9-8 win and once again proved the depth of this team’s resiliency.

We waited all year for the Mets’ first comeback victory where they trailed after eight innings. We’ve been in familiar company in this drought, as the Giants are the only other team that hasn’t had such a win this year. Well, last night’s 9-8 extra-inning win over Philadelphia proved to be worth the wait. 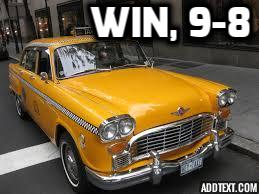 This could have been the one where the Mets blew two separate leads over the hated Phillies. Curtis Granderson got the first lead when he put the Mets up 2-0 in the second. He turned around an 0-2 offering from Adam Morgan and sent a two-run blast off the right-field foul screen in front of the upper tank in right.

This could have been the one where Seth Lugo came back to earth some. He cruised through the first three innings, tying a season-high of five strikeouts by that point. He gave up a run in the fourth on a leadoff triple by Cesar Hernandez followed by an RBI groundout by Roman Quinn. His first two pitches of the fifth were crushed by Ryan Howard and Cameron Rupp for home runs, putting the Phils up 3-2. Lugo labored to finish the inning, walking two and throwing 27 pitches for only 14 strikes. He was lifted for a pinch-hitter in the bottom of the inning after 87 pitches, and throughout the start his curveball with the insane spin rate was either right on the money or missed by quite a bit—only seven of 16 were strikes. Still, he has still yet to give up more than three runs in any outing in his big-league career.

This coulda been the one where Yoenis Cespedes continued to cement his legacy as an all-time Met. He answered right away in the bottom of the fifth with runners on the corners, showing that he can be a technician with the bat when he needs to be. He sent a low and outside 2-2 pitch into the hole on the right side to tie the game. Ces went on to give the Mets the lead in his next at-bat in the seventh, smacking the first pitch he saw for an RBI double.

This coulda been the game that Addison Reed finally broke, in his 76th appearance, and 3rd day pitching in a row for the first time since late July. It turned out to be his worst outing of the year, numbers-wise. He gave up two infield singles with a sac bunt in between to put runners on the corners. While he leads the league in percentage of pitches thrown ahead in the count, he was constantly behind tonight, and accordingly fell behind 2-0 to Maikel Franco, before a 3-2 offering was rocketed well over the right-center wall to give Philadelphia a 6-4 lead. Reed was pulled at that point, having recorded only one out.

This coulda been the one that featured the long-hoped-for foot race between Ryan Howard and James Loney. Loney lined a ball off pitcher Joely Rodriguez’s ankle which caromed into foul ground near first. Howard picked it up, and both long-legged speedless wonders sold out in a sprint and dual head-first dives to the bag. Howard won, and the Mets were retired in order in the eighth.

This coulda been the one when Jose Reyes hit the biggest homer of his Mets career. Brandon Nimmo led off the ninth with a pinch-hit single and smiles, and Jay Bruce followed with the requisite Jay Bruce strikeout and boos. With chants of “Ho-ZAYYY, Jose, Jose, Jose” hanging in the air, Reyes ripped a 2-1 pitch to deep right. Aaron Altherr climbed way up the wall to give you the briefest of flashbacks to Ender Enciarte from the night before, but his effort was to no avail as Reyes had tied the game in spine-tingling fashion.

This coulda been the one where Lucas Duda came off the bench to have his Kirk Gibson moment. In the tenth with two outs, Duda smashed a liner towards the right field foul pole. As Keith pointed out, you could see the shadow of the ball pass by the pole as it hooked just barely to the wrong side, making it merely a long strike before a strikeout which sent the game to the fateful eleventh.

This coulda been the game where Familia got pushed too far, in his 74th appearance, as he was asked to pitch multiple innings for the second straight outing with just one day fallow in between. Freddy Galvis led off with a double and advanced to third on a groundout. Hernandez, one of the better contact hitters on the team, was then intentionally walked to face banjo-hitting A.J. Ellis.

This coulda been the one where A.J. Ellis, who often looks like he is swinging a stick made out of uncooked pasta, got his second game-winning hit against the Mets in a month. He only has four other hits in said month, but sent a looper into right last night that dropped in front of Nimmo and gave the Phils a 7-6 lead. Jerry Blevins was then brought in to aggravate things by hitting Odubel Herrera on a 3-2 pitch to load the bases, before Terry Collins called for his tenth pitcher of the night en route to a team-record 27 players used in one game.

It could have been the one where Jim Henderson’s Mets career gets buried, after he walked in a run trying to clean up the mess left by Familia and Blevins, leaving the score at a head-lowering 8-6 in favor of Philadelphia.

This coulda been the one that was a second straight crushing loss against a second-division division opponent. But it wasn’t.

Instead, it was the one with the most triumphant bat flip in Mets history, the one where Asdrubal Cabrera launched a 1-0 pitch from Edubray Ramos into the night for a walk-off three-run homer and earned the rare double “Outta Here!” call by Gary.

For a season that was starting to look like one of ‘what coulda been’, at this point it is solidly in the camp of ‘who the hell knows,’ which is undeniably awesome and bonkers and life-affirming—if occasionally heart-stopping at times. LGM!