Mets vs. Phillies Recap: Pheasting on the Phillies

Share All sharing options for: Mets vs. Phillies Recap: Pheasting on the Phillies

The Mets beat up on the Phillies pretty seriously on Sunday afternoon at Citi Field, in the final home game of the regular season, scoring 17 unanswered runs and making Saturday night’s failed comeback seem like ancient history. 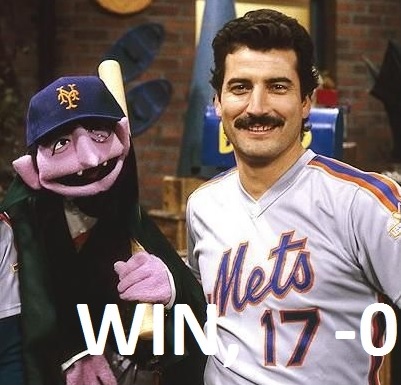 Robert Gsellman started for the Mets, and he continued to impress. Over seven innings, Gsellman struck out eight, walked two, and allowed three hits. Aside from the first inning, during which he allowed two of those hits, he didn’t allow more than one baserunner per inning. Granted, this Phillies team is not exactly an offensive powerhouse, but Gsellman kept them off balance and off the board.

Jake Thompson started for the Phillies, and over four innings, he gave up three runs, while walking three and striking out one. The Phillies used six pitchers, and each gave up at least one run.

The Mets got on the board in the second inning. After a Jay Bruce double (?!?) and a T.J. Rivera single, James Loney grounded into a run-scoring double play, which sums up his season quite nicely—more successful than it should have been, but still pretty embarrassing.

In the fourth, Curtis Granderson socked his 30th home run of the season, before the Mets loaded the bases and eventually scored on a Jose Reyes walk. That’s the type of game this was.

The Mets loaded the bases again in the fifth, and scored three runs, the first on a T.J. Rivera single, and the second on a Rene Rivera hit by pitch. The hit by pitch, thrown by Phil Klein, was unsuccessfully challenged by the Phillies. Klein then was replaced by Colton Murray, who promptly threw a wild pitch, scoring Jay Bruce.

In the seventh, after new pitcher Frank Herrmann came into the game, Jose Reyes walked with the bases loaded for the second time of the game before Asdrubal Cabrera hit a grand slam, ensuring the Mets would score at least eight runs in all four games of the series.

But there was more! Reyes drove in another pair in the bottom of the eighth with a double, before Eric Campbell singled home two more, and then Brandon Nimmo doubled home two more still. The 17 runs was the most the Mets scored this year, replacing the July 3 14-3 trouncing of the Cubs as the offensive crown jewel of the season.

The Mets used two relief pitchers, Fernando Salas and Jerry Blevins, both of whom looked strong in their inning of work. Salas struck out the side, continuing his excellent tenure with the Mets thus far.

Over the course of the series, the Mets scored 44 runs, won three of the four games and, despite some less than stellar pitching in the first three games, managed to find a bit of an offensive groove.

The Mets travel to Miami on Monday for what is sure to be an emotional series against the Marlins before finishing out the regular season in Philadelphia against these same hapless Phillies.