New York missed an opportunity to gain on competitors with a stale 4-1 loss to Washington in the opener of a critical series.

It would be nice to just be content with the fact that all of the Wild Card competitors lost and were miserable offensively last night, and that Noah Syndergaard had a strong outing despite not having his best stuff, and that Terry Collins actively gave Addison Reed and Jeurys Familia the night off in a 4-1 loss to the Nationals. But hey, we’re New York, where we tend to downplay moral victories, stress over missed opportunities, and have relatively high expectations of the speed and accuracy of customer service. 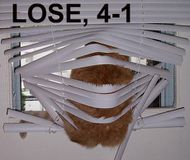 Thor himself may have dialed back his speed a notch in the interest of greater accuracy last night, and the result was a great pitching performance. Throwing has never been a problem for him, and he did pop 100 MPH a couple of times in the first inning but sat 97-98 on the SNY gun for the balance of the game, with his slider checking in at 90-92. His sinker did not have optimal dive, and his slider was missing some horizontal break, so it definitely should be seen as a positive development that he was able to coax the results he did out of what he was working with: only striking out four but holding the Nats to just three hits and one walk over seven innings, with 74 of 109 pitches going for strikes. And he got that far after a 24-pitch opening frame. It’s the third straight game where he used his two fastballs (sinker and four-seam) with relative parity, with a third straight strong result.

With the overwhelming dominance he has exhibited at times, it can be hard to remember that Syndergaard has less than two full years in the bigs, which means he can get better; and he will certainly need to when it comes to limiting the running game, which muddied his results again this time out. Despite only four baserunners, the Nats went 4-for-4 on steals, including two of third base without a throw.

Trea Turner led off the game with a two-strike Texas Leaguer into right field that dropped for a hit. He promptly stole second (where a good throw from catcher Rene Rivera would have actually cut him down) and likewise swiped third. He then scored on a sac fly that Curtis Granderson caught less than 50 feet from the infield dirt; this was the shallowest sac fly you will see outside of the Little League World Series, and painful in that between the stealing-us-blind and the fact that we have a quasi-center fielder with a functional throwing arm who needs playing time (Michael Conforto), this felt like spotting the Nationals a run in a critical game.

The Nats scored a second run in a similar fashion in the fourth, as Bryce Harper doubled with one out on a full-count heater, stole third, and walked home on a two-out single up the gut by Wilson Ramos on a 1-2 pitch that caught too much plate.

The Mets’ offense, which had been so good at immediately responding to Marlins runs in the previous series, made an attempt to kick into gear in the fourth. With only an Asdrubal Cabrera single to show for itself to that point against young A.J. Cole (who was in no way impressive), they got on the board with Cabrera’s 19th homer of the year—a solo job that came one pitch after he had hit another homer-length drive a handful of feet foul. If any more Mets are in the market for injuries, they should look into getting the one this guy’s got.

After Yoenis Cespedes was retired, Jay Bruce got a gift single off of Cole’s glove and Wilmer Flores walked, but Curtis Granderson’s struggles with RISP continued with a pop out to third and Kelly Johnson likewise failed by whiffing on a full-count flat 82 MPH slider with no break. New York’s inability to solve mediocre young pitchers may weigh heavily as they navigate a September schedule of poor teams with nothing to play for but armed with call-ups.

The only other time the Mets had a runner in scoring position was the seventh, when with two out, Rene Rivera walked and pinch-hitter Travis d’Arnaud was hit by a pitch. Jose Reyes couldn’t catch up to Koda Glover’s elevated 97 MPH heat, and struck out to end the threat. All told, the Mets garnered only four scattered hits on the evening.

The game was still 2-1 heading into the ninth, when Jerry Blevins gave up consecutive hits to Daniel Murphy and Harper to put runners at second and third and no out. Collins brought in the struggling Hansel Robles for a predictable result: a two-run single by Anthony Rendon to pad the lead to 4-1.

This was a situation where the right idea was applied in the wrong situation: Collins seems to recognize that he has overworked Reed and Familia, and thus avoided using them. HOWEVER, keeping it a one-run game in the ninth should have been the highest priority, and since both bullpen aces had not pitched the previous night, it probably was an optimal time to use one of them—if not to start the ninth, then definitely when trouble was brewing.

So it’s confounding situations like this that makes you wonder if Collins will ever get it right—even when he catches on to what logic has long established, does he know how and when to apply it in a dynamic situation? Like when he continued to break longtime habits by using his backup catcher for the night (d’Arnaud) to pinch hit in the seventh when Rivera reached base...buuut it took him until d’Arnaud was hit with a pitch before he pinch-ran for Rivera. I personally was looking forward to the pathos of a possible extra-base hit from d’Arnaud to paint struggling third-base coach Tim Teufel into a corner.

It’s the kind of “right idea/flawed process” that you wonder might finally slay this club. Like you have to wonder when Conforto crashed into the wall instead of going full extension on Christian Yelich’s game-deciding seemingly catchable three-run homer the previous night: If Conforto had been called up earlier, and felt more comfortable with Citi Field’s dimensions as a result, would that have been just a long out in a memorable comeback game?

Here’s the upshot though: the writers of each NL Wild Card contender are offering a similarly morose take this morning after a tall glass of ineptitude all around. But in New York, keeping up with the Joneses never feels like enough.