The topic of Lucas Duda is one of the most divisive topics among Mets fans today. Is he good? Is he bad? The issue seems to be a source of controversy, and an endless debate.* And this year, Duda will be back to playing first base almost every day, so the debates will probably rage on. So before they even start up again, I have set out to find a consensus. I have set out to find the real answer.

*He is good. Objectively so.

I decided to orchestrate a highly-complex and outrageously-scientific study—I did a poll. I asked dozens, maybe even hundreds of people their opinion of Lucas Duda as a baseball player, and I will now share the results here. The platform I used to conduct this poll was one of the most reliable sources for intelligent baseball content, as well as all other types of valuable discourse about everything, ever—Omegle.

For those of you who don't know what Omegle is, it's basically an anonymous chat website that allows you to chat one-on-one with anyone in the world. Once you go on the site, you can choose to chat either by webcam or only by text. If you choose to video chat, it also provides a text box next to the feed of the webcams, so you still have the option of talking through text. Once you make your selections, it immediately gives you an anonymous chat partner from anywhere in the world. You can chat with this person about anything, either through the text box or verbally through the webcam, and you can end the conversation at any time and be given a new chat partner. This is sort of like the speed-dating version of Tinder, only, unlike Tinder, you're not looking to date anyone, and you're likely to see the other person's genitalia much quicker here.

I figured there's really no better website to crowdsource opinions on Lucas Duda from. Where else can you get results from all over the globe this quickly? Certainly nowhere else on the internet offers the ability to chat with people far away. There have to be people out there in faraway countries like the Philippines or something that are just itching to have their voices heard on the highly-polarizing topic of Lucas Duda, and now is their chance.

One of the nicer things about Omegle is that you can tell it to search for chat partners based on your set interests, so you're more likely to find someone that you have something in common with and can have a nice conversation with. So to ensure that I am most likely to find people itching to have a discussion about Lucas Duda's skills, I set the following as my interests:

I will say this: I did not find one person who had "Lucas Duda" as a common interest. It appears that there aren't too many people out there who, like me, are looking to primarily discuss the issue of Lucas Duda's baseball ability. This is surprising.

So I set forth on my mission, in earnest, to find a consensus opinion on Lucas Duda. Now, if there's one thing I know about conducting polls and surveys, it's that in order to get the best results, cordiality and vigilance on my part are essential, like so:

I don't know what went wrong there. This seems like a good time to mention that, while I spent a majority of this in the video chat portion of Omegle, I didn't actually take the Post-it note that covers my webcam off for this exercise, which is why that person wanted to see me. Anonymity is important here, and it is important for all involved, which is also why I will not share pictures or video of any of the participants involved, either. I only communicated by text for this exercise, and I will provide only the text conversations in this post.

Early in my quest, I found that this would not be without some roadblocks. Often times, people disconnected from me as soon as I posed the question: "What is your opinion of Lucas Duda as a baseball player?" It seemed as though there were many people who—I kid you not—were unwilling to discuss this topic, and were possibly even weirded out that I asked the question, as strange as that may seem. Even stranger, though, were some of the things I saw on the webcam.

One must wear a shirt to participate.

Additionally, I ran in to a few people who had "baseball" as a mutual interest, but I don't think were even willing to discuss Lucas Duda at all.

This is Tina, who, despite my plead, did not answer. I ran into her several times, and I continued trying to get her opinion on the topic of Lucas Duda. Since she liked baseball, she had to have an opinion, right?

She did not respond. Since she was adamant on plugging her Twitter handle, I decided to hit her up there.

I have not received a reply. I'm starting to question if Tina is really a baseball fan.

At one point, I realized maybe my problem was that, despite my attempts to be considerate and amicable, it's possible I still wasn't being nice enough. So I tried to be even more personable:

People who had no idea who Lucas Duda was

I found there to be many, many people who did not know who Lucas Duda was, which was quite staggering. I don't know how so many people could be ignorant to such a hot topic like this one, but I guess some folks can surprise you. When this happened, I often asked them to give me an answer anyway; just take a guess, you know? Some of them were actually on point: 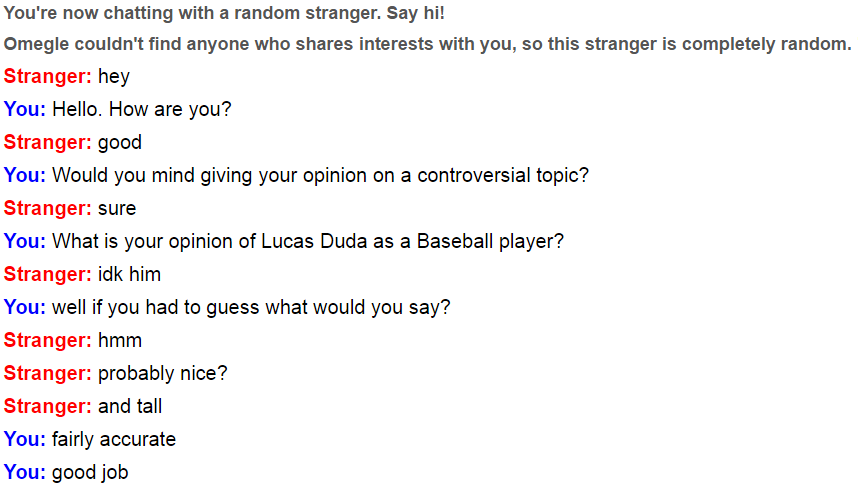 Most shockingly, though, I found one person who knew who Duda was, but overtly did not care about the issue of his skills. How could you not care about such a vital topic of discussion? 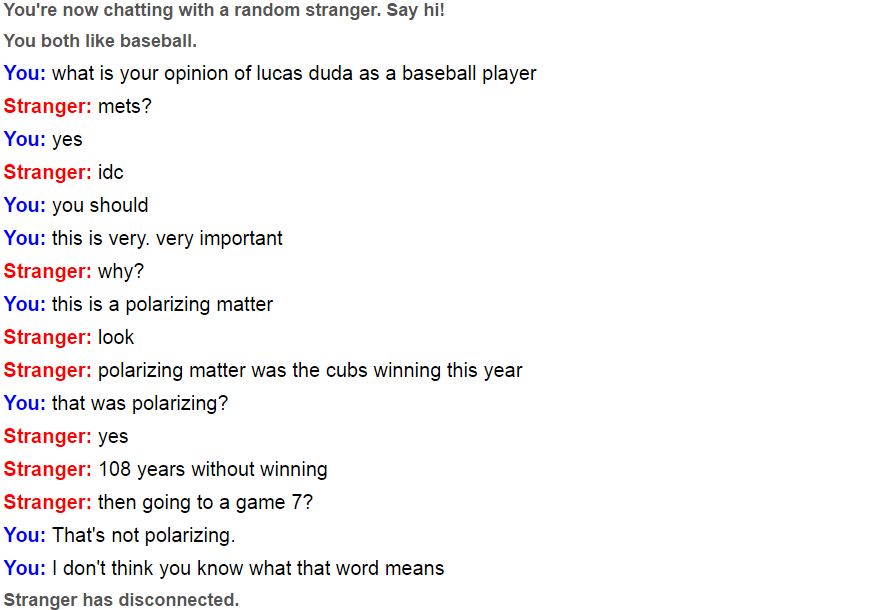 She totally didn't know the meaning of polarizing.

People who had inappropriate/nonsensical answers

These are the people who, once I asked the question, either responded with something disgustingly inappropriate, flipped me off on camera, or were just outright insulting. Obviously, I can't share any of these examples because this is a family website.

People who had negative opinions of Lucas Duda

I know I've made it seem like I received lackluster results from this survey, but I did, in fact, manage to find people who actually had opinions on Lucas Duda. There were plenty of people who had negative opinions of Lucas Duda, and, as a Duda supporter myself, my patience for them often wore down quickly:

But other times, I was able to compose myself as a professional, and tried to engage in respectful debate with them:

And one time, I actually changed a guy's opinion: 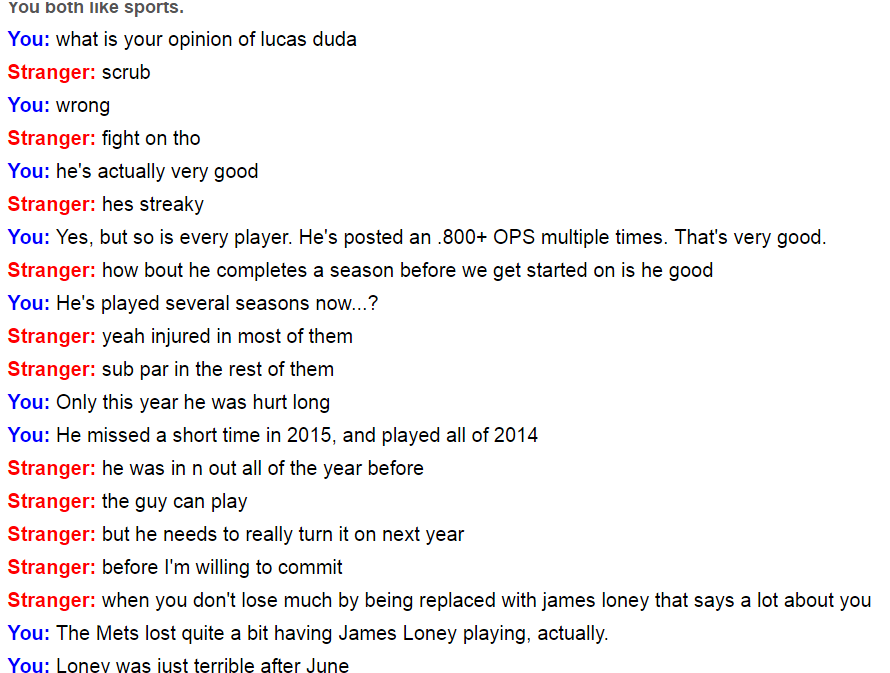 He went from saying he's a "scrub" to admitting that he can play. I'll call that a win for me. And I left that James Loney bit in there just to piss Steve Schreiber off.

People who had positive opinions of Lucas Duda:

The people who were in support of Duda often just answered with something along the lines of "good player" or "he's cool I guess" or "lit." Since this was a matter of business, and I was clearly on the same page as these people, I often just ended the conversation there, since I had nothing left to say to them. Were their answers BS? Maybe, but who was I to doubt their knowledge? Occasionally, though, support of Duda looked like this: 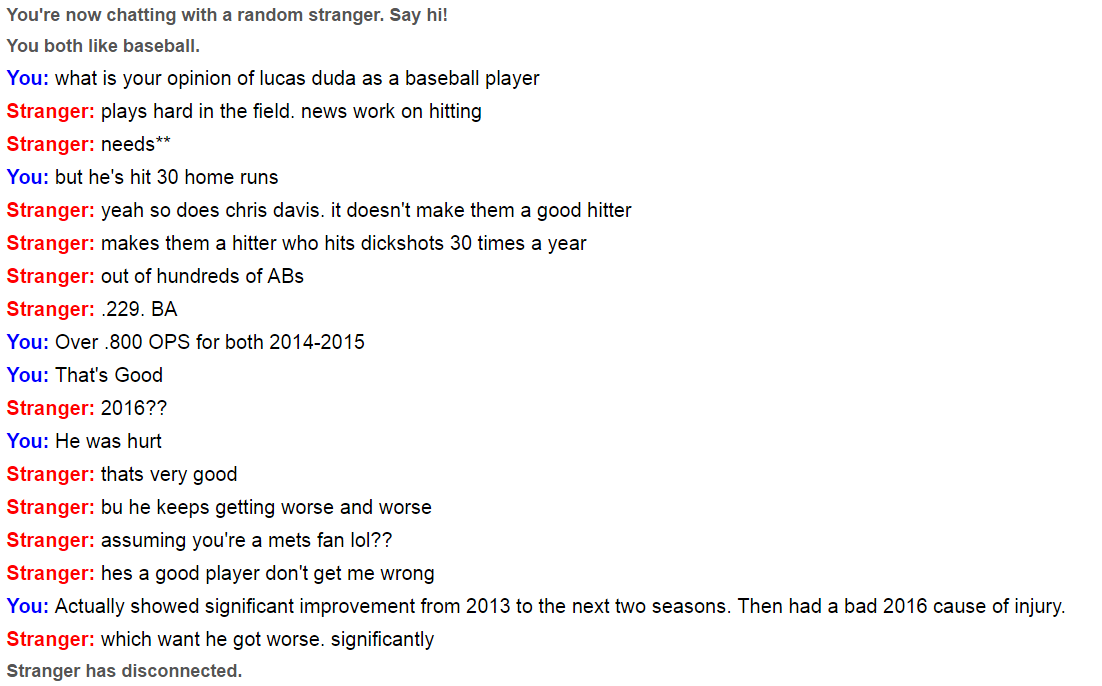 I consider this a positive endorsement, because this guy admitted he's a good player. It's was a rather round-about way to get to a back-handed compliment, but I'll take it.

Among the positive responses, however, was one of the most incredible interactions I think I've ever had on the internet.

You might not understand why this was so jaw-dropping, but I don't think I can convey to you how amazing this was. I had just spent far more time than I care to admit in one of the weirdest corners of the internet, asking random idiots a question they didn't know the answer to, and all I had to show for it was an onslaught of insults, weird looks, and requests to show my boobs. Of the few people who actually knew what I was talking about, all of them responded with one-word answers, half-assed replies, and any analysis done on their part was archaic. All of them, except for this guy. This guy was music in a cacophony of idiocy; my sole water source in this desert of stupidity.

He was a fellow baseball nerd, and a saber guy. He admitted to reading Fangraphs. Frankly, I couldn't believe it. In the top-right corner of the screen on Omegle, it tells you how many other people are using the site at that specific time. During this conversation, that number read close to 30,000. I'd like to think he was the only one of those 30,000 people who knew anything about sabermetrics. And, by a total random selection, I found him. Like a $100 bill in the middle of Times Square, he could have wound up with anyone. But I got him. I could have gotten any idiot, but I got this guy.

All of the interactions you've seen here lasted maybe two or three minutes at most. I talked to this guy about baseball for what had to be 30 or 40 minutes. We discussed a number of topics from sabermetrics, to Mike Trout, Jay Bruce, Jose Bautista, and the incompetence of the Diamondbacks organization. You can read our entire conversation here, if you are so inclined.

Then, for seemingly no reason at all, and probably by accident, we were disconnected.

And that was it. He was gone. It's almost as if the music did not exist; the water source was a complete mirage. As if my mind had become so numb that it forged an actual intelligent person just for the brief moment of relief—before I came to my wits and realized that I was still alone, fighting this battle by myself, dying of thirst, and trying to find a way out of this damn desert.

Also, that dude had a really smart opinion of Lucas Duda.

I asked probably over a hundred people this question, but I only got 45 good responses that fit into the above four categories. Here are those 45 responses organized in a crappy pie chart that I made on a website for children: 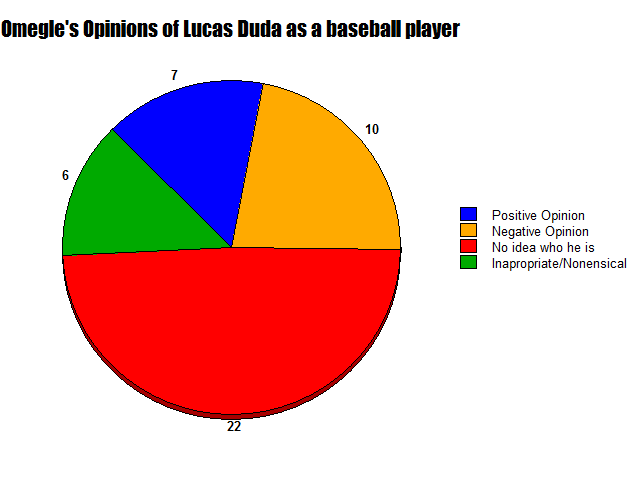 If there's a lesson we can take from this, it's that we need to do a better job getting the word out about Lucas Duda more. That said, it's also possible Omegle just might not be the best place to crowdsource Lucas Duda opinions, after all.