Last night, Major League Baseball and the MLBPA agreed to change the way intentional walks (IBB) are facilitated in game play. Instead of lofting the ball to the catcher four times, the intentional walk will now only require a signal from the dugout. The change is believed to be related to MLB initiatives to increase the pace of play - though it's dubious how much of an impact this will really have; in 2016 there were 932 intentional walks last season spread over 184,580 plate appearances - this means the rule change affects only ~0.5% of plate appearances.

Similarly, there should be no real impact to the fans of the game. Intentional walks are scarce, and errors or misplays on intentional walks are even more rare. Jason Kipnis may have scored twice on IBB miscues, but that's probably two more times than the average player would benefit from an IBB miscue over their career. 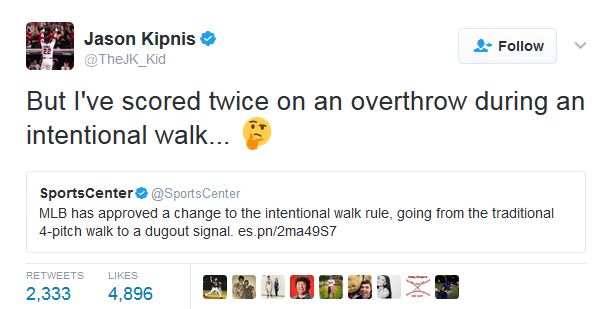 I understand Kipnis's sentiments; the unintentional moments that came from intentional walks were exciting. Jason Kipnis has scored 434 runs over the course of his career, but those two shot to the forefront of his mind last night when the rule change was announced. What many fans appreciate most about baseball is the sheer randomness of the game; there are so many outcomes that exist within each play of a game, and when something truly unexpected happens it becomes hard to forget.

As we embrace the changes made to Major League Baseball, let's take a moment to celebrate some of the unexpected, unforgettable, and unintentional plays that we'll never see again.

Tony Pena and Dennis Martinez team up to fake out John Olerud, resulting in a strike out

Tony Pena, a devious fella, does it again! This time with battery mate John Hudek, to get Brian Johnson looking

The rule change might've actually made a difference if Barry Bonds was still around. He drew 120 IBB in 2004 alone! None were as memorable as this incredible rare bases loaded RBI-IBB (his expression is priceless):

In 2016, Gary Sanchez pulled one out of Cabrera's playbook, and took an intended IBB pitch to the warning track for a sacrifice fly:

The most common, yet still incredibly rare, intentional walk gone wrong is the wild pitch. Here are several throughout the years (including Jason Kipnis!)

I think you get the idea here...

Lastly, because Mets, here is Eric Campbell striking out looking after the Phillies realized that it makes no sense to give Eric Campbell a free base:

Say goodbye to moments like these. We expect roughly 25% of at-bats to end up in a hit, we expect Yoenis Cespedes to hit a home run every 20 at-bats... but the intentional walk put those expectations aside: the only thing we expected was a walk—any other outcome was purely a gift.

At the same time, we must also remember that there are countless unforgettable statistical anomalies that are still waiting to be untapped by the chaotic game we all love. As much as I'll miss outcomes like the ones in the GIFs above, I know that the game will continue to amaze and surprise fans around the globe.