I'm proposing a team of infield mashers that play plus defense with a high variance outfield that should catch most anything catchable. My rotation doesn't add a no-doubt ace so I'm proposing a six-pack of starters featuring one via trade, one free agent and a formidable top 4 in the pen. I trade a fair amount of minor league depth but protect our top 4 position prospects and top 2 arms. It's not pain free but I think we owe Jake another attempted run while he's still in orange and blue.

The bottom line: We get to watch our guys hit balls over the wall but swing and miss more than we'd prefer. They will prevent runs with the best of them while we keep our fingers crossed for better rotation health. Here are the new guys and their costs. LGM! 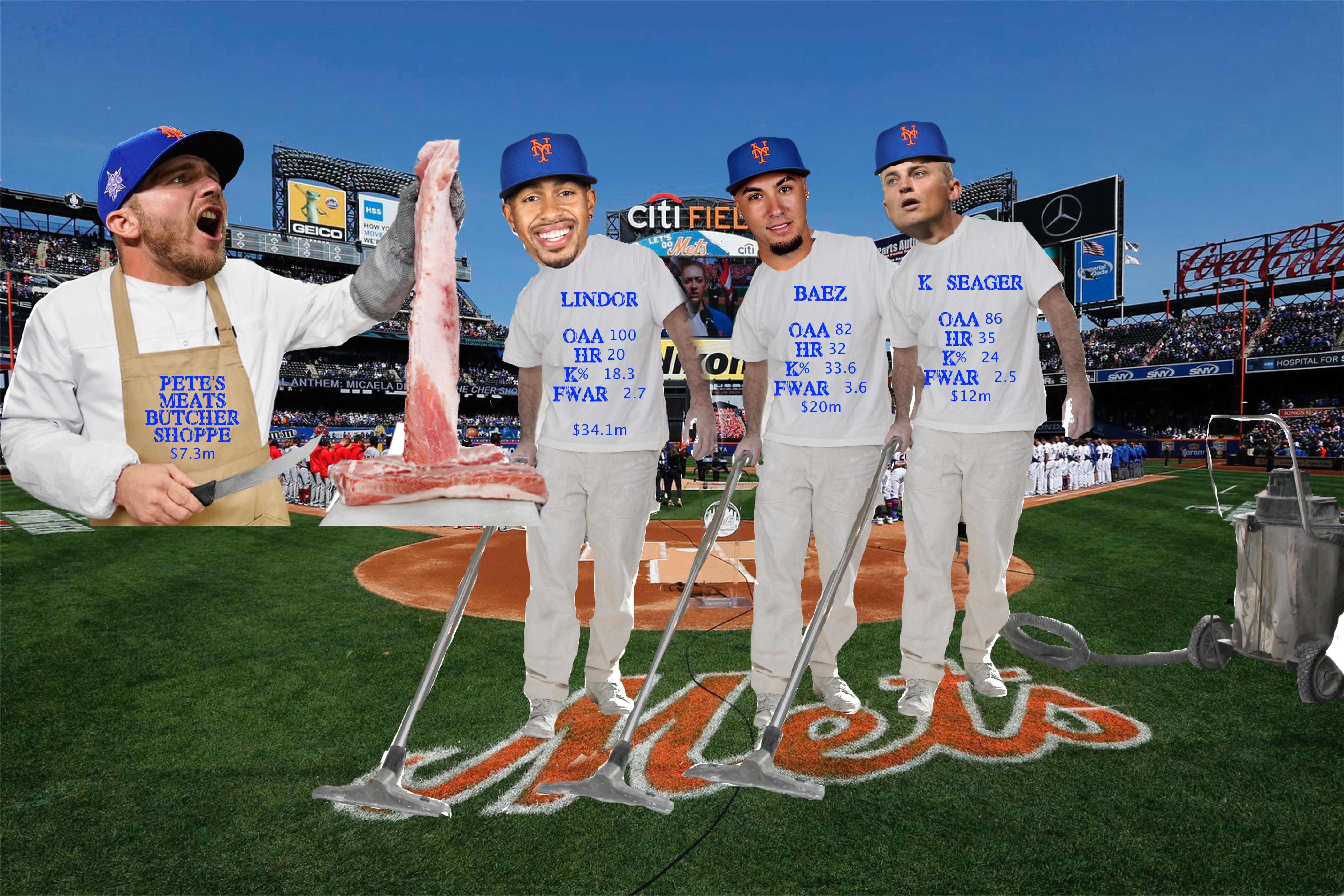 Sign Javier Baez & Kyle Seager as free agents. They join Pete and Francisco Lindor with Luis G as the UTE along with JD Davis and Robbie Cano in reserve/DH.

Outs Above Average ranks Frankie 100th percentile, Baez 82nd and Seager 86th. For reference, JD has been a single digit OAA guy (horrific). In 2020 the projected starting IF tallied 123 home runs while 3 out of the 4 can catch ball. All those whiffs from Baez (and maybe Seager) will at least create a nice breeze ... Seager had a 24% whiff rate last season along with 35 HR's though his career rate of 18.1 is lower than Pete's career 23.6%. 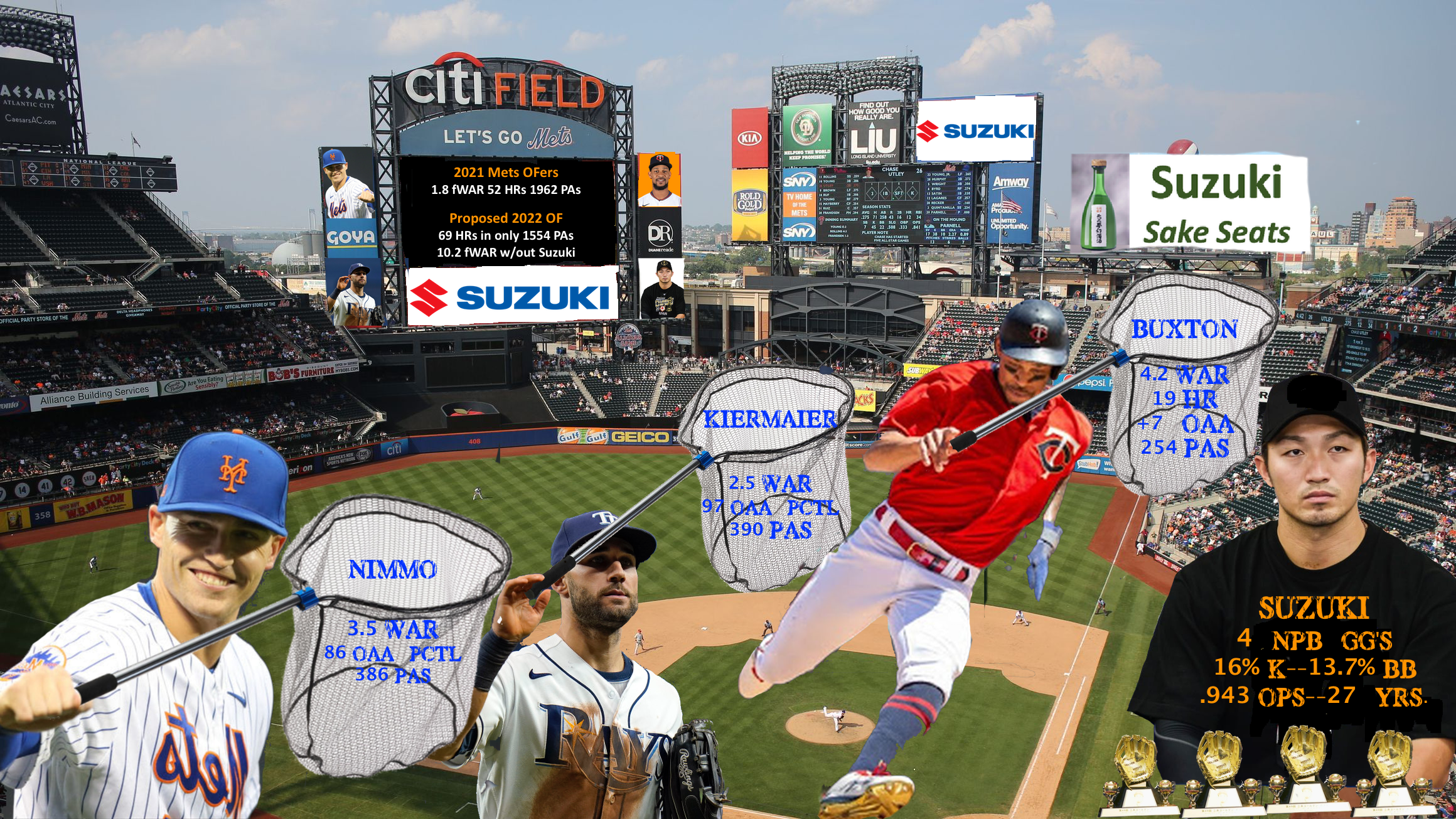 Yes Buxton is a frequent visitor to the IL - not unlike Brandon Nimmo. Byron also put up 4.2 fWAR with 19 HRs in a mere 254 PA's last season along with being a 94th percentile OAA guy. Combine with Brandon Nimmo's 3.5 fWAR in 386 PA's and even if they each only play half a season that way and we'd get 6-7 WAR out of a single OF slot for ~$13.5m. That would blow away what we got from our 5 most frequent 2021 outfielders. And if both are healthier than last season ...

KK's 2021 2.5 fWAR in 122 games would upgrade from Conforto's 0.8 in 125 games and allows Nimmo to be a full-time LFer even if Buxton goes down. Mets pitchers get the benefit of 4 plus gloves patrolling the grass. Suzuki is a wildcard - will he be a gold glove version of Dom Smith, approach Conforto's production or contend for ROY? Chad Pinder comes from Oakland as the 5th OFer. 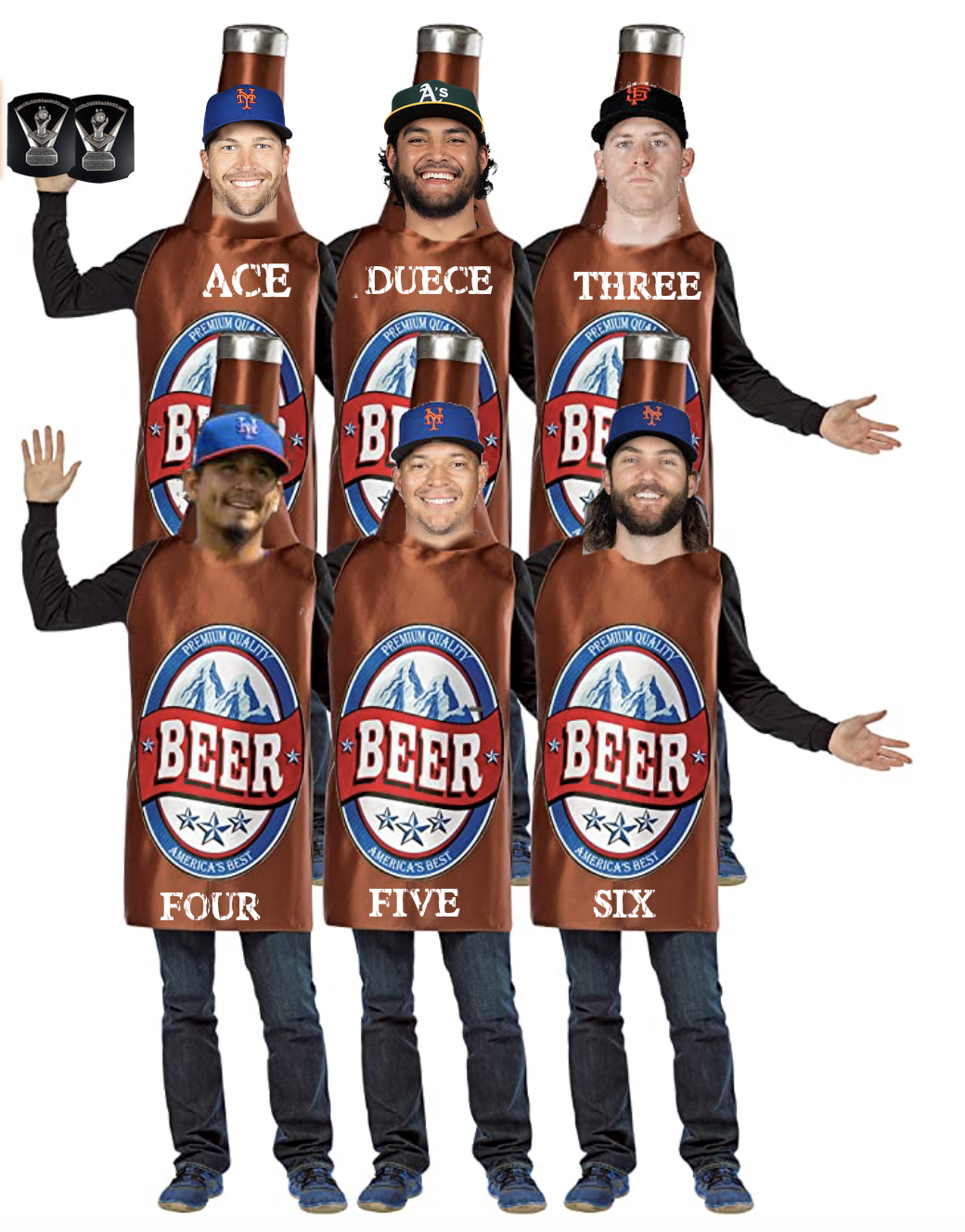 This starting pitching stuff is scary stuff .... Will Jake return to slay the opposition or remain hurt and slay our hopes? Will Cookie crumble or feed our sweet tooth? Will Taijuan tie for most Mets innings pitched or walk the park? Who knows...

We probably do know that it's a fool's errand to expect 180 innings from any of them so let's use a six-man rotation to lower injury risk. In reality there's probably always someone hurt but I'd like to try the six-pack until that happens.

We augment our three returning starters with Trevor Williams as #6, signing Anthony DeSclafani and trading for Sean Manaea. The cost? David Peterson, Khalil Lee, Jaelyn Palmer & Jose Butto but I'm also getting back Chad Pinder as our 5th OFer and Delois Guerra as the last man in the bullpen. It's a stiff price for 1 year of Manaea but since it takes closer to $300m to make this a truly spiffy club, a cheap #2 is critical. The defense heavy acquisitions are a safety net for a high-variance starting rotation. Hopefully we extend Manaea.

You know him. You love him. You're willing to pay him $7m. He's Aaron Loup! Add in free-agent Corey Knebel for 2/$18m, trade for Delois Geurra and start Tylor Megill as the multi-inning guy in the pen. Already there are Edwin Diaz, Trevor May and Drew Smith. Until injuries hit, this pen should be solid.

Even though I'm putting Megill in the pen, he would be stretched out in the event we lose 2 of the six-pack of starting pitchers. Additional AAA depth includes Jordan Yamamoto, Thomas Szapucki, Sean Reid-Foley, Yennsy Diaz, Stephen Nogosek and Adam Oller. Joey Lucchesi will be 12 months post-TJ around July 1.

The "Lost but Not Forgotten"

To make the budget work I'm going to trade Seth Lugo ($3.7m) for some unnamed prospect without much value, try to do the same with Miguel Castro (or DFA his $2.6m) and DFA Robert Gsellman ($1.6m) and Jose Peraza ($1.0m) while buying out Kevin Pillar's option. Contest rules require that I not offer Noah a QO so I wouldn't be getting his compensatory draft pick. He's just too risky given our other rotation question marks.

This is a go-for-it this year plan as any $250m roster has to be. It protects the gold of our farm system (Alvarez, Mauricio, Baty, Vientos, Ginn, Allen) but sacrifices depth to get Manaea and Buxton. Get your tickets for the Suzuki Sake Seats early - they'll be hotter than August by July! I'm $263k over budget based on CBT and buying out Pillar. So if that bumps me to out of competition then I'm more like the 2021 Mets than I care to imagine! 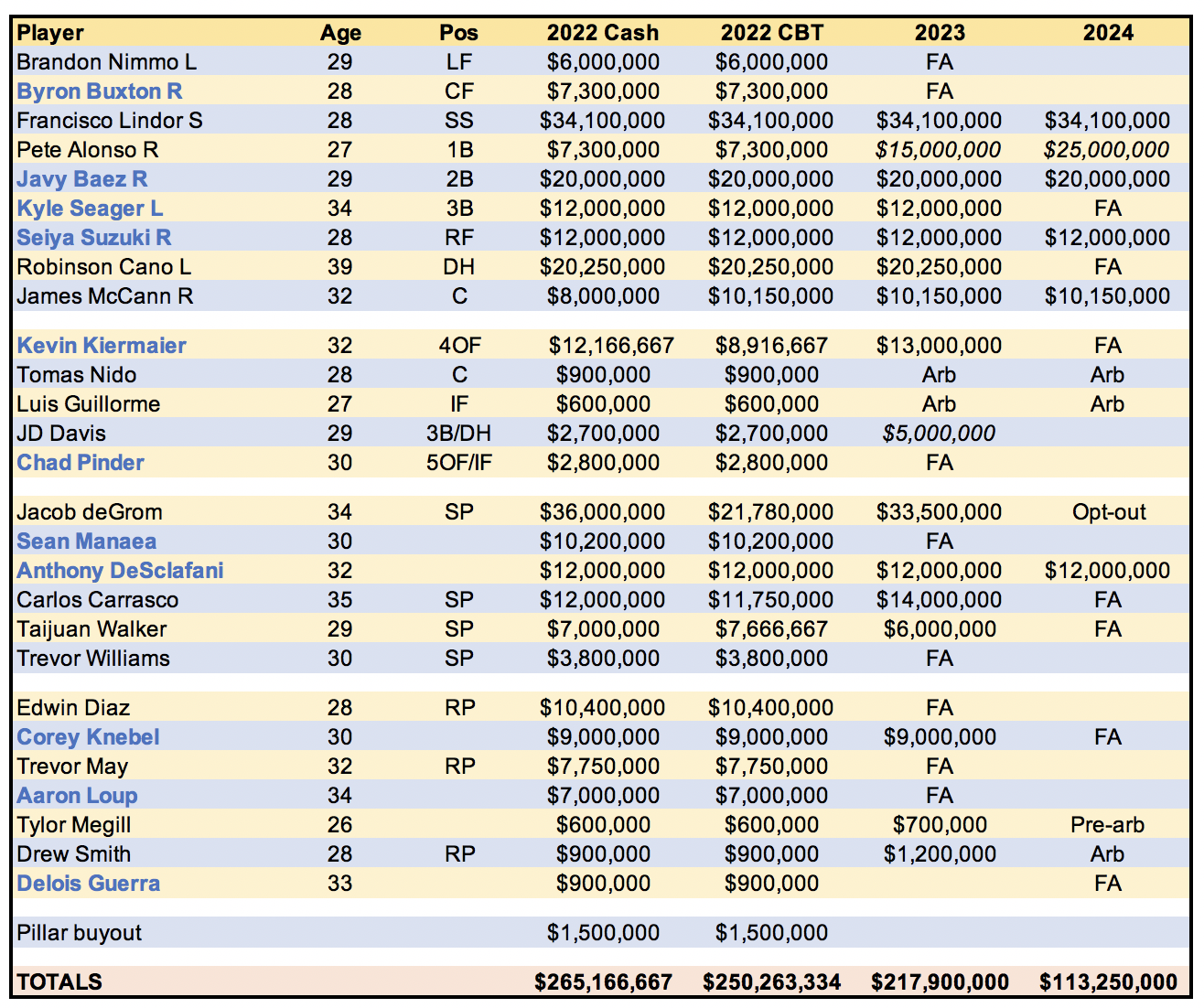 *All trades check out per the Trade Simulator at Baseball Trade Values site.