I think I missed doing this exercise last year but with prospects being more highly valued than ever and there not being much to talk about I figured I'd resurrect my semi-regular "Homegrown" Mets review.

The premise: What would the 2021 Mets have looked like if all trades & free-agency were banned and you could only play with guys that you originally drafted or signed as IFAs? Of course, that's a stupid idea that would remove the off-season and trade deadline drama that makes the sport so fun. But it might offer some insight into how good/bad the Mets are at identifying young talent. 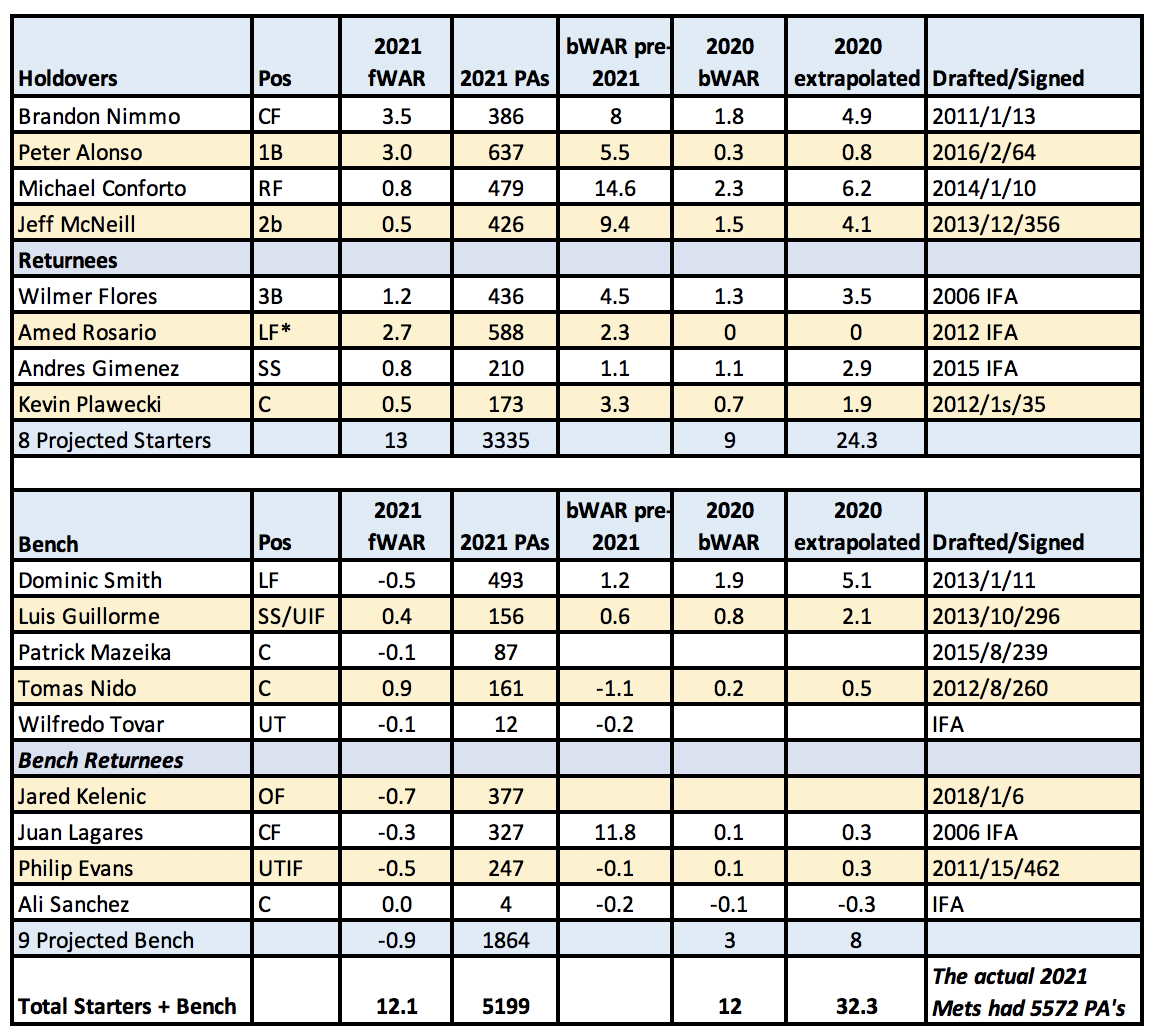 Well that sucked. What I find most interesting is that when 2020 bWAR is extrapolated to a full season, this exact same list of players produced twenty more bWAR in 2020 than they did fWAR in 2021. (Boring story for why I mixed f/bWARs apologies.) We know the main culprits - Dom, O'Neil & Conforto saw a 13.6 WAR dropoff. That alone turns what would have been a very solid lineup/bench into a huge weakness that only piled up 12.1 fWAR.

For reference there was 587.2 batting+ defensive fWAR divided by 30 teams = 19.5 fWAR for the "average" team of position players. The Mets fell 7.4 wins shy of that average but were 12.8 WAR ahead a year ago. Also worth noting is that this roster fell 373 PA's shy of the actual 2021 Mets plate appearance total.

That bench had an awfully rough 2021 posting -0.9fWAR. Ironically, the biggest culprit was the one whose departure has caused the most angst - Jared Kelenic at -0.7. Of course, if I do this exercise again 12 months from now I'd fully expect he to have reversed his trying rookie campaign.

Let's start with reference numbers - I know fWAR for pitchers is flawed but I cannot find the total aggregate number of bWAR assigned to pitchers so fWAR is the denominator. Since this is a casual exercise it will have to do.

The Mets nine homegrown starters posting of 14.8 fWAR is four wins and about 40% above average. But - believe it or not the Mets homegrown hurlers combined for 178 starts - 10% more than needed in a 162 game season. By bWAR that same group loses 4.8 WAR - so if the denominator is similar to that of fWAR then the rotation then this group fell about a win shy of average. But the bWAR of the pen goes from 7.8 to 8.5 bWAR which would increase by a couple of wins after shedding the unneeded extra innings by the poorest performers. 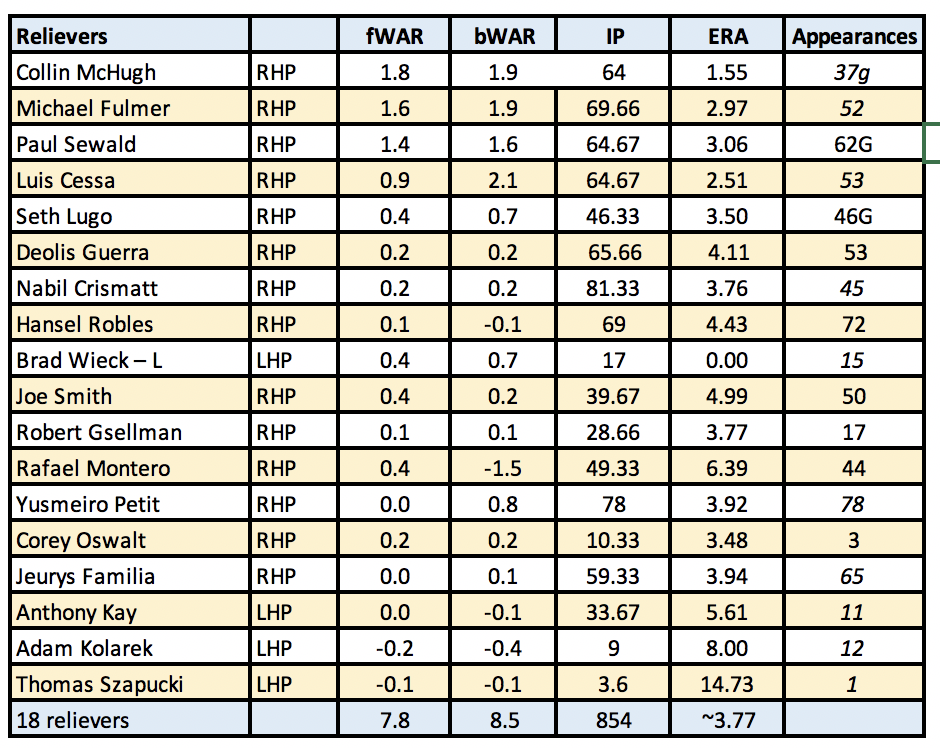 The extremely deep bullpen tallied 854 innings or 5+ per game. That's also a whopping 258 more innings than the Mets pen threw in 2021.So it's fair to say that there were plenty of relievers to cover the season - and some pretty good ones as well. You could toss out everyone with an ERA above 3.94 and still cover the Mets 2021 pen workload.

1134 players had either 50 PAs or 15 innings pitched which averages 38 per team. The Mets had 41 homegrown players which is 3 more than that average.

There were 390 non-pitchers with positive fWAR last season or an average of 13 per club. There were only 10 homegrown Mets among them.

There were 104 non-pitchers that posted 2.5 or more fWAR last season or an average of 3.5 per club. There were 3 homegrown Mets that did: Nimmo, Alonso & Rosario.

Although the "drop" list is longer, my guess concludes that in the aggregate this group of players will outperform their 2021 levels next season.

Even if a world with no trades for free agent signings this is list is imperfect. There have been years when the Mets got compensation draft picks (i.e. Kevin Plawecki) and conversely have lost picks due to signing restricted free agents. So our bevy of draftees would have been different in a world without free agent compensation/penalties.

I probably missed some IFA signings. If I have please point them out in the comments.

My "homegrown" definition does not include guys like Zack Wheeler, Noah or TdA because they were drafted by other clubs before being traded to the Mets while they were still minor leaguers. Some may argue that we "developed" them but I prefer this definition plus I'm too lazy to review every guy the Mets acquired as a minor leaguer. Your mileage may vary.