This isn't a terribly heavy post, just a posting of some stuff I was looking at recently. It had caught my eye that the remaining healthy premier hitters were posting offensive rates below their Statcast expected results. I then expanded the sample to all Mets batters (min 30 PA) and took a couple of other measures to contextualize. The final results don't seem too groundbreaking but worth a look.

Here's the table (in declining order of PA), with the final Mets total generated as a weighted average by PA (MLB averages as listed at https://baseballsavant.mlb.com/leaderboard/expected_statistics) 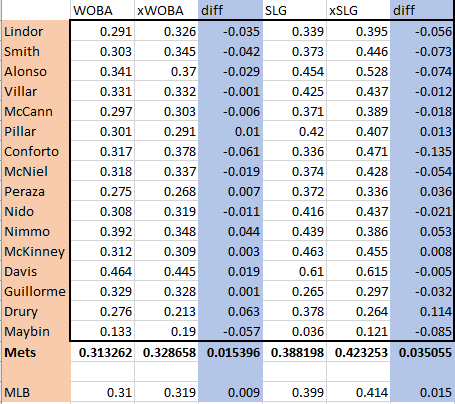 With the remaining batters included the overall team results are less dramatic. It can be seen that the MLB averages themselves show Statcast expectations being under-performed (presumably a result of the change in the ball) with these Mets showing a modestly larger gap. To explain this as the result of the Mets' reportedly using a humidor at Citi FIeld seems reasonable.

Also noteworthy is a glance at the Fangraphs' expected team records by BaseRuns. Though the Mets are a game over their "plain" PYTHAG - calculated with actual runs scored and allowed - they have allowed more and scored less than BaseRuns expects. The likely reason in sabermetric terminology would be "sequencing issues," generally speaking that opponent batters have bunched hits together more than usual and Mets batters less than usual. To the more casual fan, this is called being unclutch on both sides of the ball, though the repeatability of "clutchness" is questionable. The result is that the Mets' are two wins below their expected BaseRuns record as of last night, before the completion of that game.

In the end the overall explanation for the observed offensive shortfall is mainly a product of missing so many key hitters to injury. As well as the *illars and others have done filling in, they are just not as good as the stars they're filling in for. In particular, having the outfield down to the disappointing Dom Smith as the lone healthy starter has forced the Mets to play a number of fringe bats in addition to the adequate Pillar. The remainder is just context: the depressed overall hitting environment relative to recent years and the CIti FIeld humidor. The results do show a small hint that Nido deserves a larger share of playing time at the expense of McCann.

Overall Mets fans should be thankful their team has built a lead in the division despite these troubles. There are in fact results less than underlying fundamentals would predict, but not so much in individual batters as the team as a whole on both offense and run prevention. Any regression to the mean over the remaining schedule in this area would then be positive.