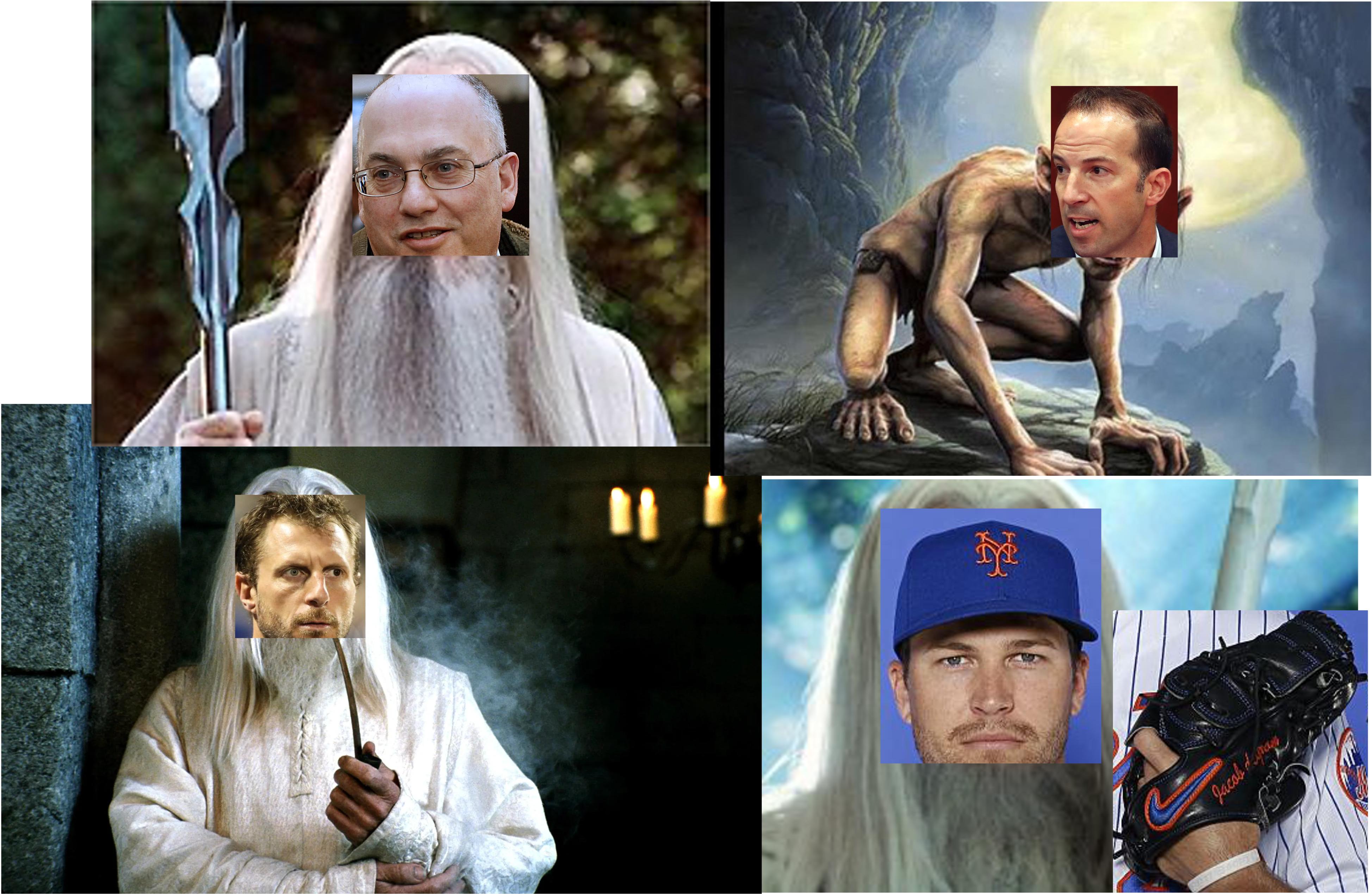 Sauron A. Cohen, evil wizard of Metsdor, has decreed his $325MM budget, and the once spry, lively hobbit Billy-bo - now the decrepit, greed-crazed creature known only as "Epplum" - must construct a World Series winning roster to procure his precious ring to release himself from his torment and return home to The Shire (which is what GMs call the quad at the Yale School of Management).

Headed by his rotation of aged grey wizards, Epplum pieced together an expensive high-variance roster of former/future kings, mighty elven warriors, unpredictable dwarves, and even a couple of orcs that he acquired via trade.

This is his story...

Of how he built that roster, not of how the season went. That story will be told around this time next year. But first! Come, dear reader, and spend 3 hours with a story that has neither a conclusion nor a climax!

Chapter 61: The Lord of the Ring: Rotation of the Aged

Ok, so I'll admit, I've already more than exhausted my capacity for LOTR references, and I'm frankly shocked I got as far as I did with it. The whole thing was based on the idea that "Sauron A. Cohen" would somehow be funny, but there's no way I can keep this up for a full AAOP.

To paraphrase a problematically named Quentin Tarantino character, since we are both clearly comfortable speaking AA shorthand, I will switch over to that for the rest of this fanpost.

So where to begin, again?

I suppose the best place to start is with the facts of the current state of the team. It owes a lot of money to a player who won't be on the roster, and a whole bunch more to a 39 year-old starting pitcher who battled oblique issues all last season. They're as win-now as win-now can be, but the budget's a concern (in this scenario, at least), and I don't want to completely sell the future in exchange for present day success.

Given the situation, I focused on a few key areas:

But first thing's first, I had to clean up around the fringes of the roster.
The DFAs: 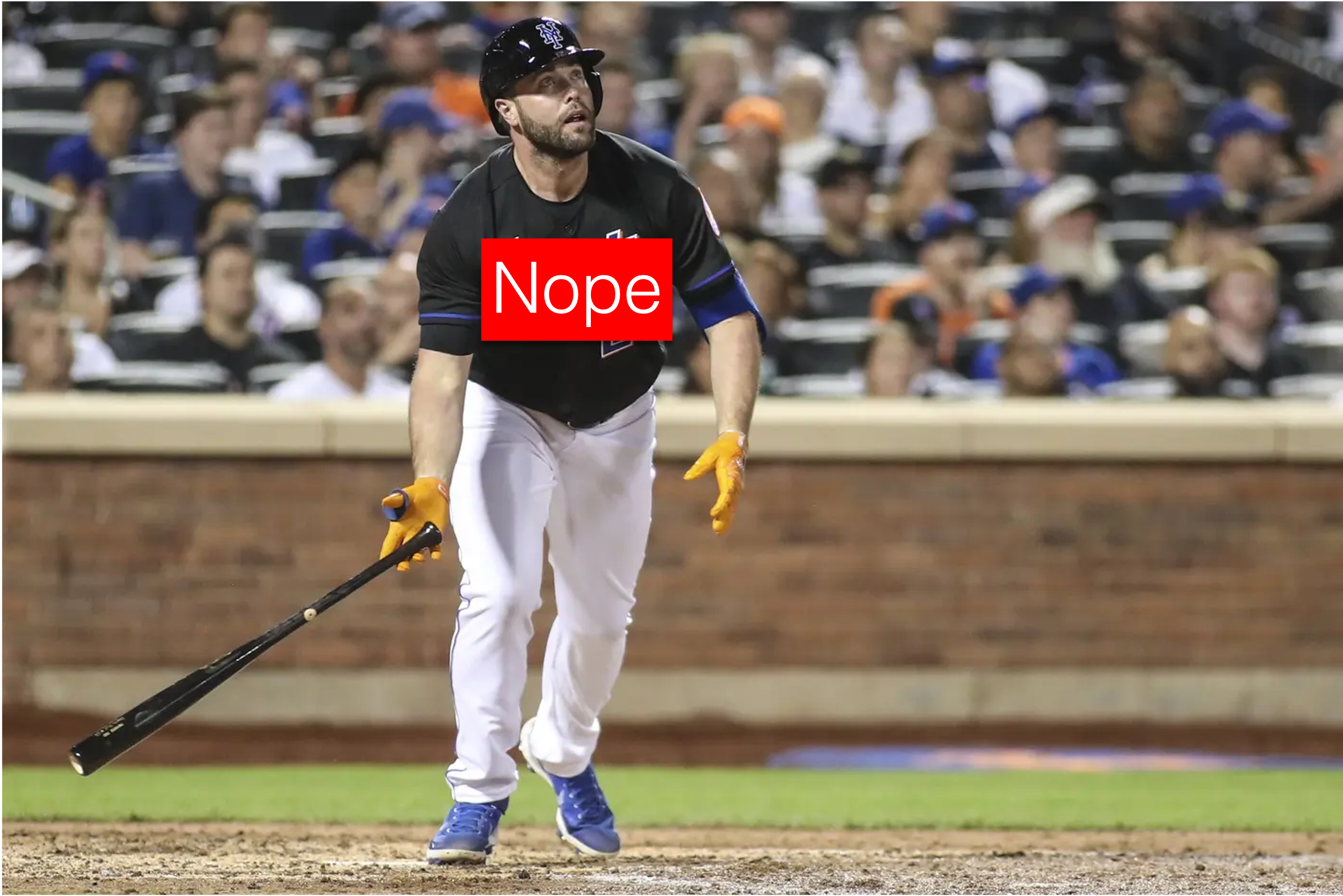 Darin Ruf - We're paying him $3MM to take a walk and clear a roster spot. I would've loved to move him in exchange for any player of moderate usefulness, but alas, no one was biting. I can't imagine why, but I digress.
Sean Reid-Foley - He wasn't good when he was healthy, and then he wasn't healthy. Sorry, pal, there's only room for one epic mustache on this 40-man roster, and that goes to Mr. Nogosek.
I'll also say that I plan on grabbing a random veteran catcher and throwing out a bunch of NRIs to SPs and RPs right before ST starts to make sure we've got some dudes in AAA. I'm not gonna get into all of that now, because it hardly matters, and I didn't have enough time to scour minor league FA lists to pinpoint anyone of particular interest.
Moving on...
The Qualifying Offers: 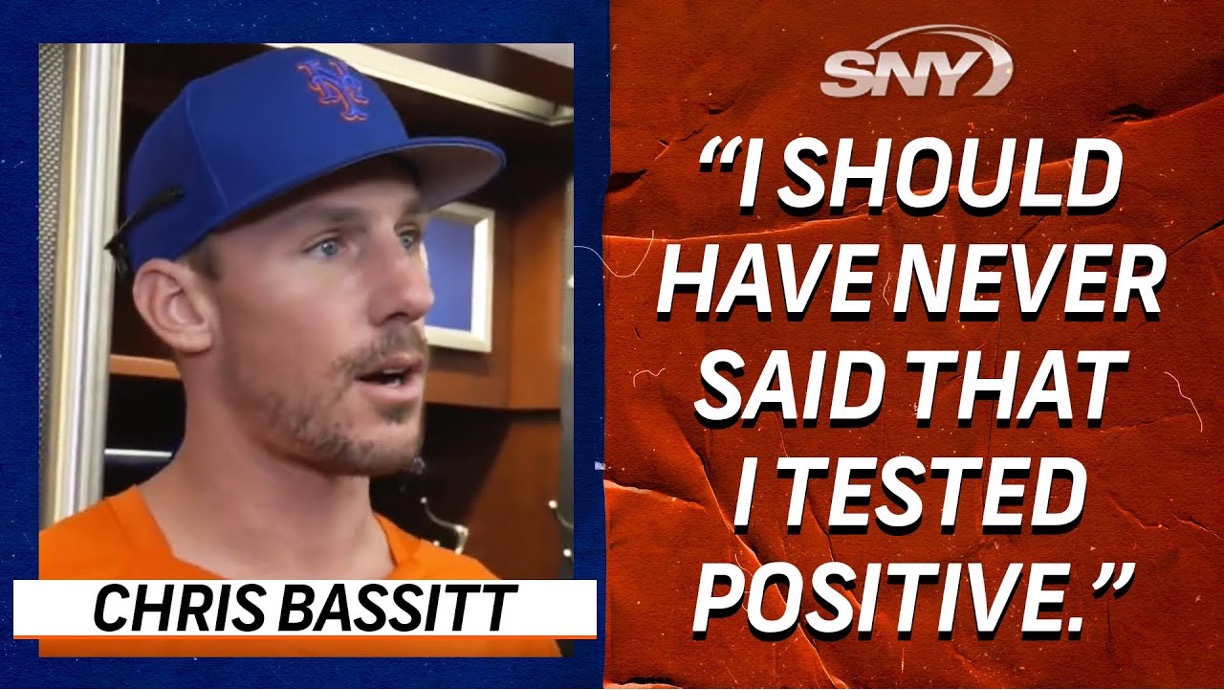 Nimmo, deGrom, Bassitt. No need for Diaz, he's already signed. More on that later.
Clearly, none of those 3 will accept the QO, so on to the free agents...
The Options: 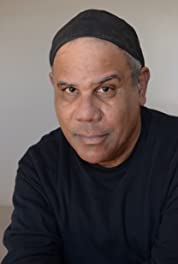 Carlos Carrasco, SP - 1/11 - We already owed him 3 for his buyout, so why not go all the way in and make it 14? We needed a #4 this season anyway, and he was really good in Speed.
The Free Agent Signings:
Here's where it starts to get interesting. Or maybe not, since most of these guys were on the team last year. 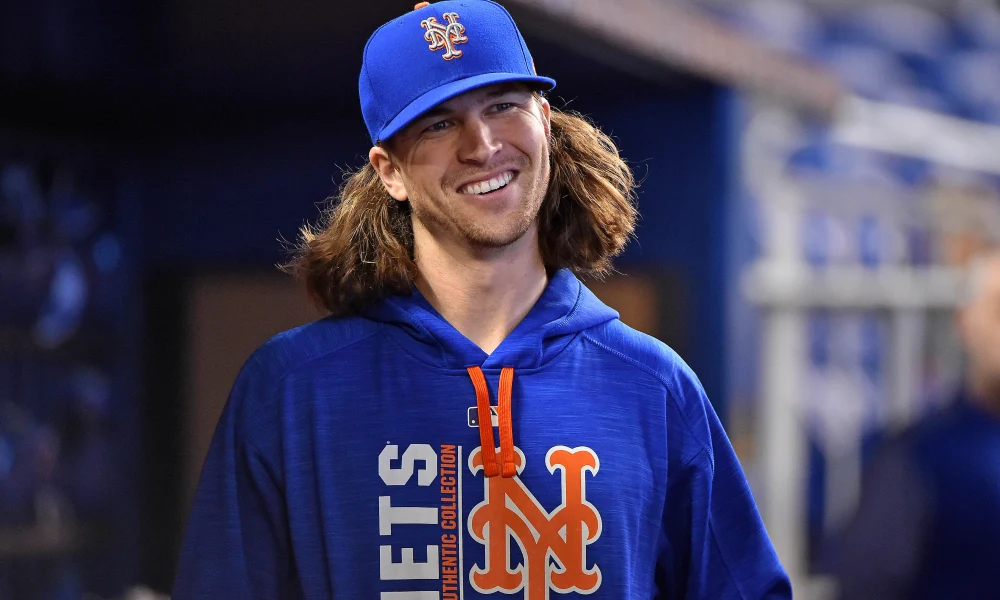 Jacob deGrom, SP - 4/180 - It's a huge contract and a huge risk, but he doesn't cost the extra picks that Carlos Rodón would have, and I'm reliably informed Rodón has had injury issues, too. So we're all in on Jake through his age 38 season. Here's hoping that's a good idea.
Brandon Nimmo, CF - 6/132 - Not quite "the George Springer," and worth every penny. We keep our newly-minted plus defensive CF in Queens for the foreseeable future and don't have to worry about Starling Marte's legs or forcing Trea Turner to play a position he hasn't played since 2016. If it wasn't Nimmo, it was gonna be more pitching and a combo of Kiermaier and Haniger to round out the OF. I thought this was the preferable route.
Edwin Diaz, RP - 5/102 - In my version of that contract, the extra $2MM covers Timmy Trumpet's 5-year Citi Field residency.
Tyler Anderson, SP - 2/30 - Mr. Anderson's agent isn't Smith, but this is a good deal for both sides either way. Anderson will slot in as the 3 behind Jake and Max, giving us a completely different lefty look in the middle of the rotation. He was also cheaper than Bassitt and might be better going forward. This was an easy decision for the price, IMO.
David Robertson & Adam Ottavino, RP - 2/12 for both - I'm bundling them together, because they're both getting the same deal and filling ostensibly the same roles in front of Edwin Diaz. They'll be interchangeable old dude setup men in front of our relief ace, as should have been the case last season. The Robertson signing is very much me righting two wrongs from last year, but he's also a solid reliever despite his advanced age. 2 years is a bit of a risk, but the total value allowed us to keep the AAV down.
Michael Lorenzen, RP/SP - 2/10 + club option - I'm billing Lorenzen as "The Poor Man's Zach Eflin," if such a thing can possibly exist. Nevertheless, Lorenzen has some intriguing underlying skills, including excellent spin on his 4-seam which has been knocked around on him in the past, but has the potential for more with some tweaks to his pitch mix.
I'm taking a bit of a gamble that our recent hiring of Mr. Jagermeister - who previously overlapped with Lorenzen when he was with the Reds and brings some Driveline knowledge to the table - will allow us to tap into Lorenzen's potential as either a high-leverage RP or swing man. To cover both, his contract will have a vesting option for a 3rd year at $10MM if he exceeds either 40 holds or 200 IP across his first 2 seasons as a Met.
But wait, there's more! We're also going to secure a couple of old friends into their mid 30s, but not until the regular season has started. I had to finagle the timing to make sure the dollars didn't hit 2023, but I felt the need to recognize a couple of dudes who should be Mets for a while longer.
The EXTENZ: April Edition 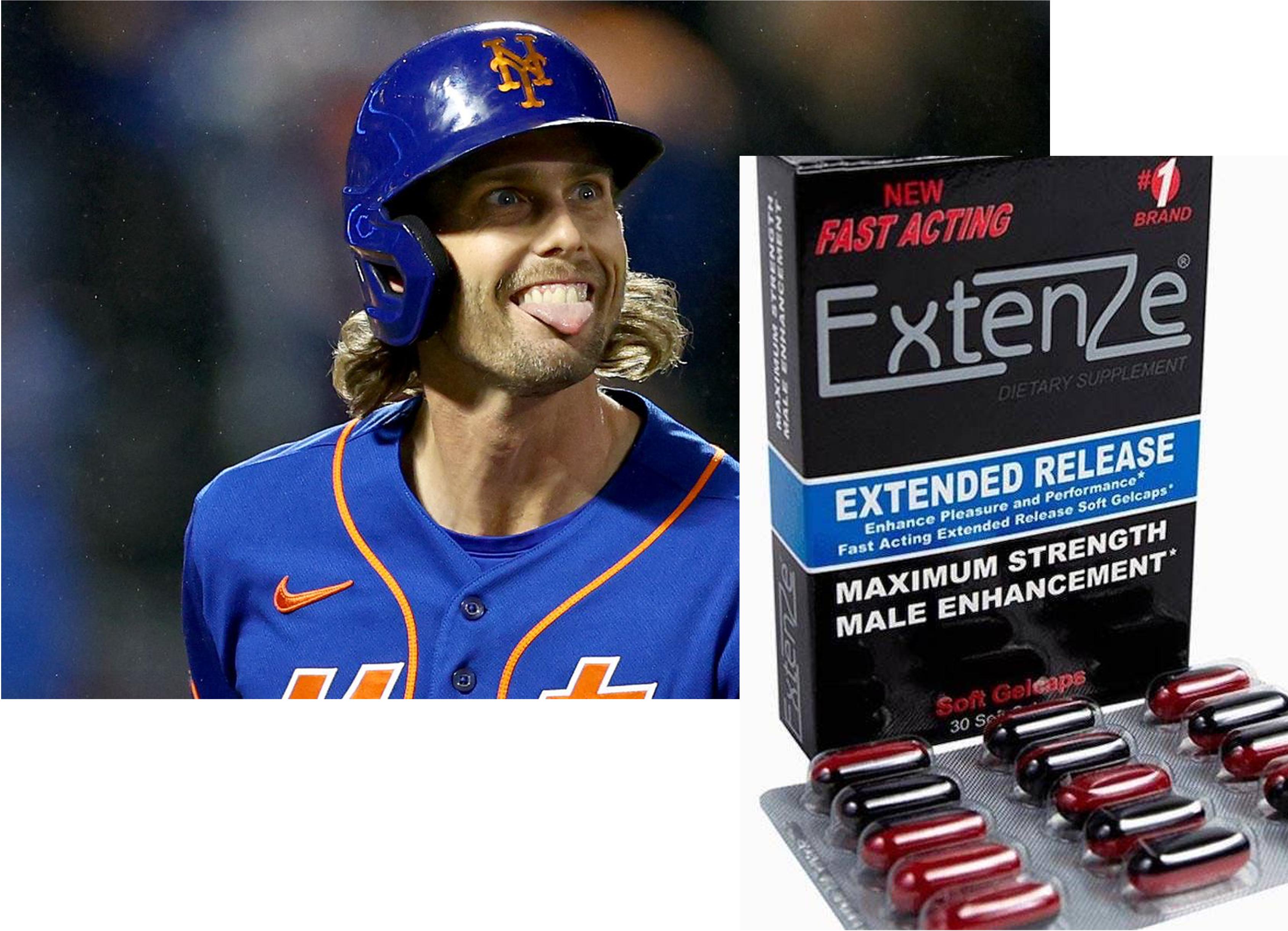 Pete Alonso, 1B - 7/164.1 - With his 2023 salary, this adds to 8/180 from 2023-30 for Pete, and eeks him just above Matt Olson in AAV over the same contract duration. Pete has earned it as the team's premier power source, and with the RF wall moving in again, he may be able to clear 62 in 2023 with his oppo pop. Long live the Polar Bear!
Jeff McNeil, 2B/OF - 4/60 - A relative steal for the 2022 NL batting champ, but The Squirrel is already turning 31 next April, and this gets him his big payday to remain at the keystone in Queens through 2026, which will be his age 35 season.
Now, here's where it gets interesting and a little weird, but bear with me.
TEH TRAIDZ 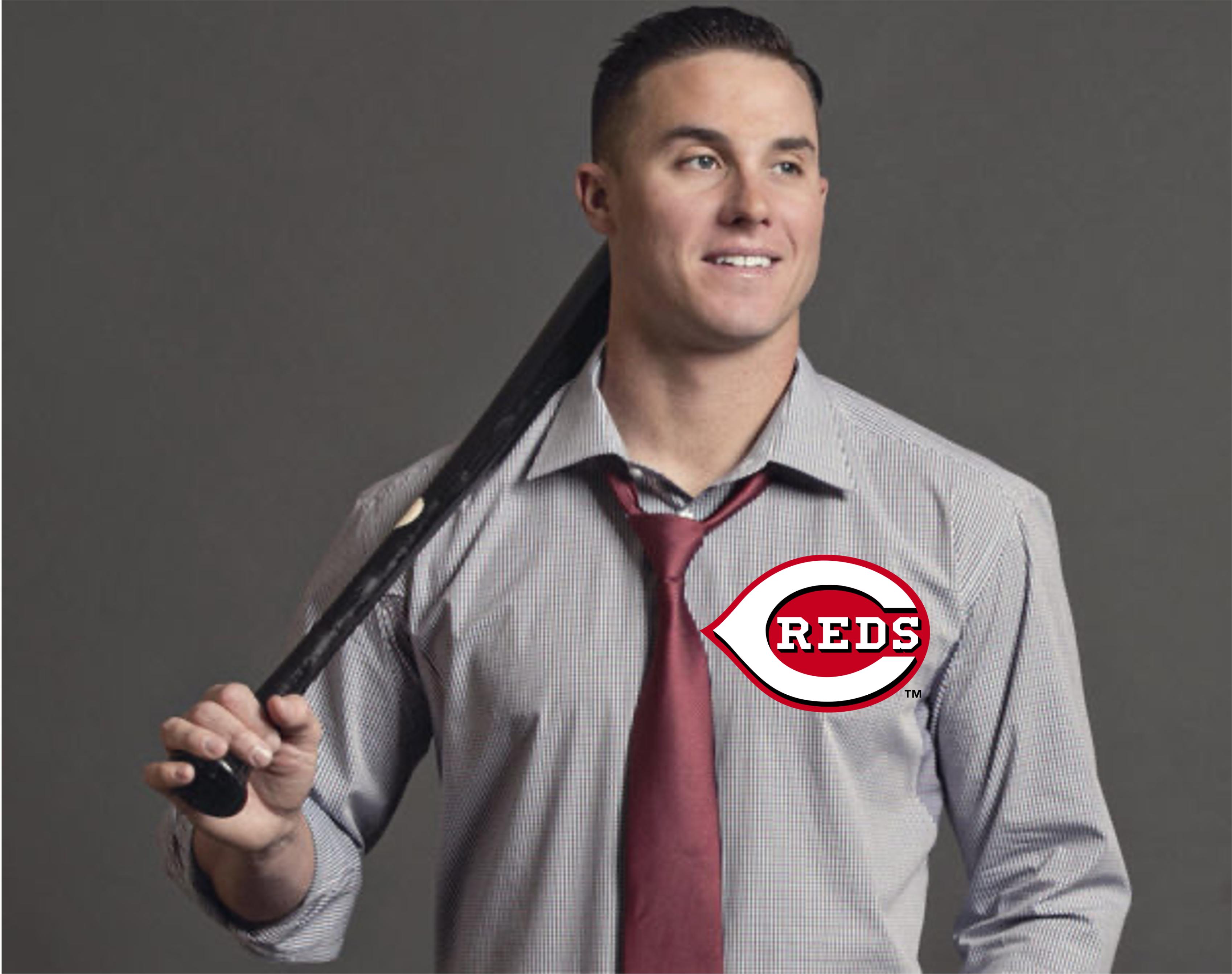 James McCann + $24MM to the Reds for Joe Boyle
That's a lot of money to give away in exchange for a pitcher who might never figure it out, they'll say. But I say, McCann was a bad signing and is a dead roster spot. We're not gonna trade a guy who should've won the 2022 Gold Glove, and we need a spot for Alvarez to play everyday. So McCann must go, and I wasn't about to dump him for nothing, so we're taking back a guy with an incredibly live arm, who to paraphrase the immortal Lou Brown, might kill somebody if we don't teach him some control.
For those who don't know, Boyle throws 100+ and has been a starter in the Cincy system. He reached AA last season, striking out 31 and walking 25 in 26.1 innings of work. There's something there if the Mets can figure out how to unlock it, and I hate to put so much pressure on a guy they just hired, but Boyle has Mr. Jagers' name written all over him.
Dom Smith + $4MM to the Brewers for Robert Gasser
Let's face it: Dom Smith was always destined to be a Brewer. I don't know exactly why that is, but he just feels incredibly Brewers. Plus, the Brewers are deep on org pitching and thin on MLB bats, and Dom could use a change of scenery of wherever he can find it. That puts him in the Sausage City (don't quote me on that), and puts Gasser in the Mets 2023 AAA rotation.
This is the 2nd org move for Gasser in less than 12 months - he went from SD to MIL in the Hader trade last Summer - but he finds decidedly more opportunity in the MLB rotation with his new club. The Mets are bereft of legitimate upper minors SP talent, and Gasser provides that, if in a somewhat unexciting way. He's a slight lefty starter with average velo and an OK slider. Sort of a smaller David Peterson in some ways, but his changeup is still developing, and if it gets all the way there, he could surprise some people in 2024 or sooner.
And that's that. So how does this all look in terms of the 26-man roster, you ask?

That's sort of a thin bench, and I added Mangum as the 5th OF (counting McNeil as the 4th) over Vientos erring towards defense over offense for that spot. Escobar is more than capable of being the RHH off the bench and short side DH platoon-mate for Vogelbach. There are always bats available at the deadline if needed, too.
I also really like our SP depth in this scenario, pushing Megill down to stay stretched-out as the AAA ace with Gasser a close #2 behind him. It was imperative to push Butto further down the depth chart, and we've achieved that this offseason. 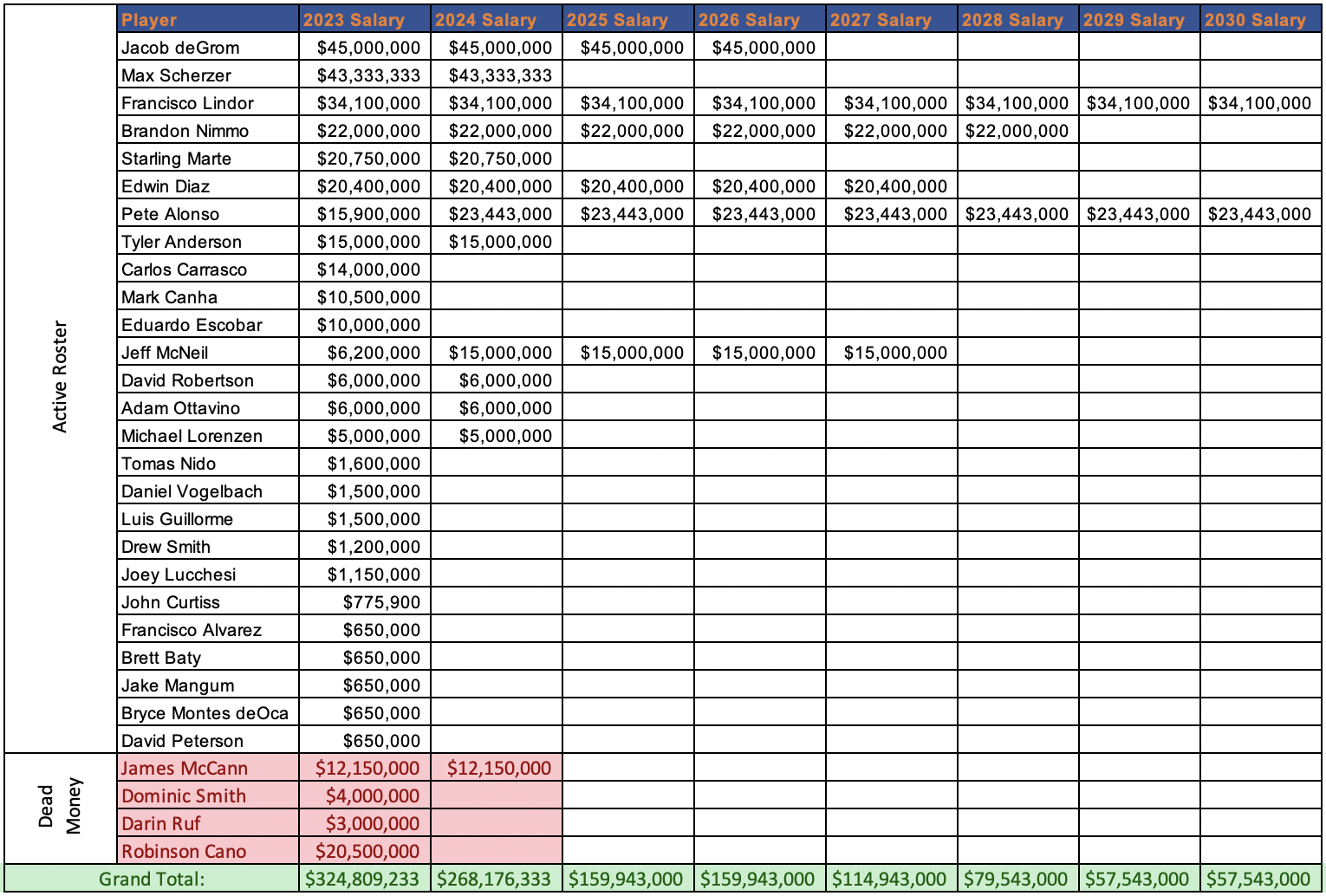