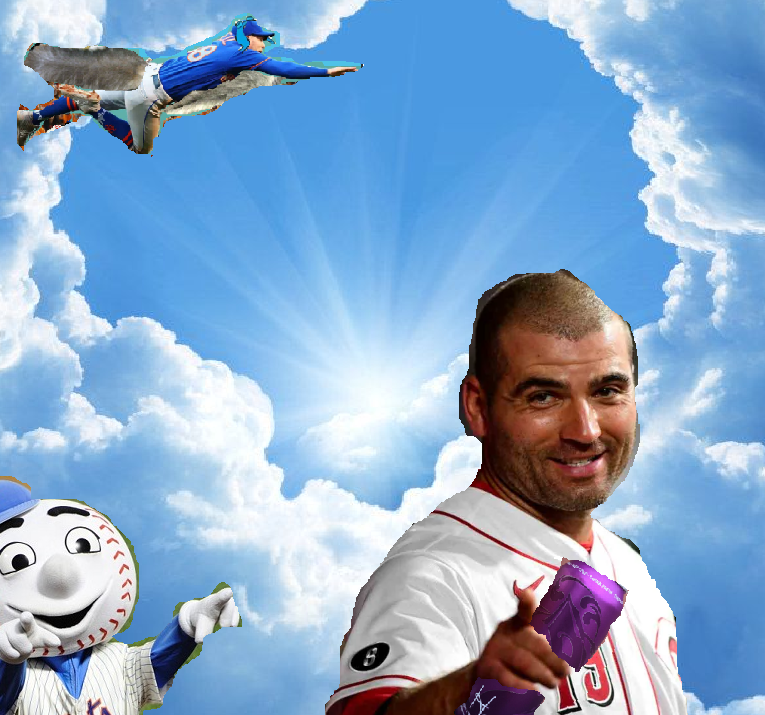 Votto. Sadly, he will not factor into my AAOP. I mean, other than me mentioning him now, and having contemplated how Cincy definitely wants to reduce payroll to fit my narrative for bringing possibly the greatest human being this side of humanity to guide the Mets to inevitable post season glory, and the fact I need to throw this out there so maybe he sees it and returns my calls… Call me. Ok, sans the Votto (please call me), I wanted to lay out my philosophy on approaching the offseason before I delve into the moves themselves.

There are 6 main concerns that need to be factored into the plan:

The rotation, because there is currently not much of one. The bullpen, as there is currently not much of one. CF, as in how to address it. Internally/externally/not at all. The catching situation, as it was putrid last year, at least on the offensive side of the ball. The minor league system needs to be a pipeline, but in the same regard, it needs to feed the majors, and especially with pitching. I will try not to fail to attempt to diagram how best to proceed to achieve point 6 in order to address the 5 points above the 6th:

There are some NOs, some QOs, and some Vottos decisions on options.

These are the DFAs and declined options Declined options are player exercised would be deGrom, Walker, Bassitt, and Givens. DFAs, which really are few, would be Gore, SRF, and that’s about it. These guys ain’t moving needles and need the 40-man spots.

These go to deGrom, Bassitt, Nimmo, and Diaz. I debated on Walker, but just couldn’t do it.

Carrasco at 11 mil - It's the delta on the option to his contract, which is a no brainer to me. He’s all back of the bus in the rotation, but those numbers at a 4th pitcher are perfect. Mid 3’s in FIP, 150+ innings. Carlos is a Cookie Monster. But less blue.

Vogelbach at 1.5 mil - All day, every day, and some days, where some days are all the days. I’m dazed. Need a Haze about now. He’ll be the long side of the DH, most likely.

Curtiss at .776 mil - For sure, as the whole point to signing him last year was to utilize him this year. Plus has 2 more years control, if the interwebs are steering me correctly.

Firstly, let’s address the FA signings. There are 6. 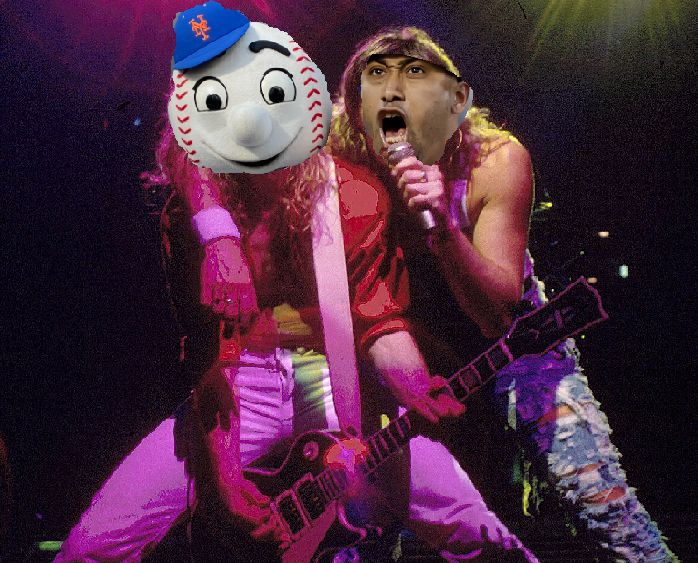 Edwin Diaz – 5 years, 102 mil. Sugar! Pour some... I just rolled with the numbers that he actually signed at, but he was a major target of mine and figured why mess around with the numbers as that would require me to think. He was/is the best reliever on the market, Manfred’s balls don’t seem to be affecting Diaz with the big dongs, and I can’t believe I wrote that but I’m keeping it, and 50% K rates are in style. For a BP that currently has almost no one in it, you sign him ASAP, which is just what Cohen actually did. 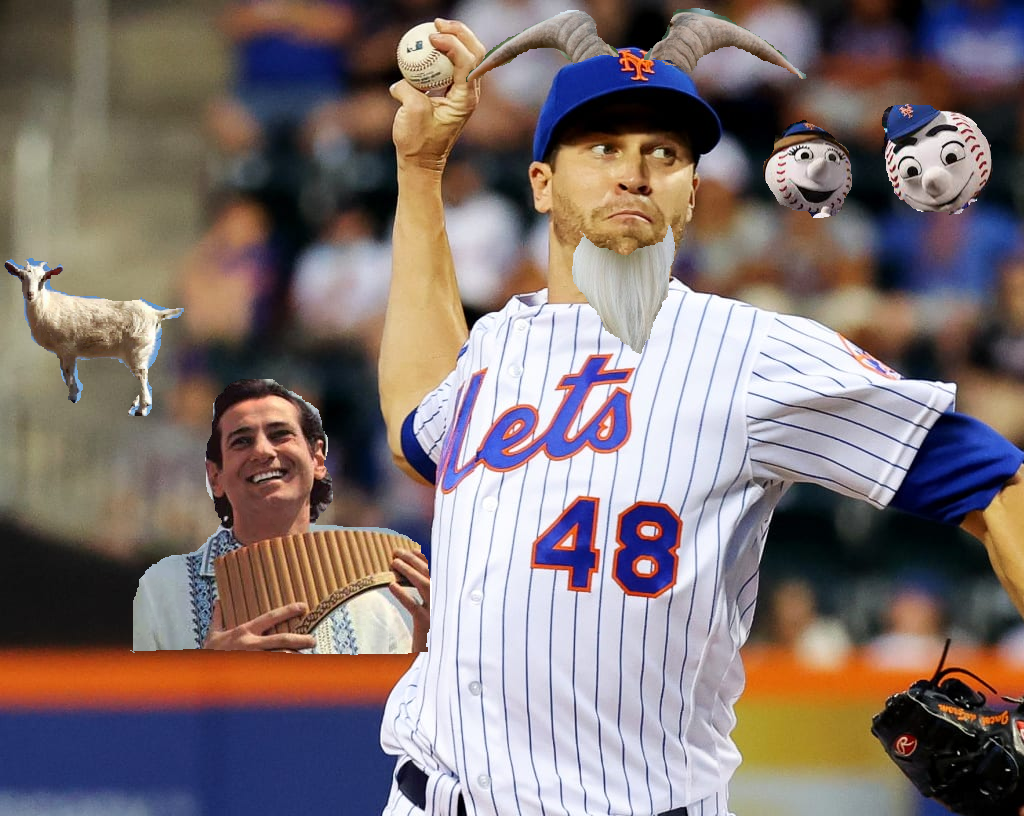 Jacob deGrom – 3 years, 135 mil. It’s a lot of money, there are concerns related on health, his age is getting up there… And he’s still got the best stuff in the game. I can’t not do this. Met for life and I’m banking on him finalizing his HOF, GOAT and other capitalized acronyms. It’s higher risk, I know, but worth it. He could totally break, and he could totally win 3 Cy Youngs. 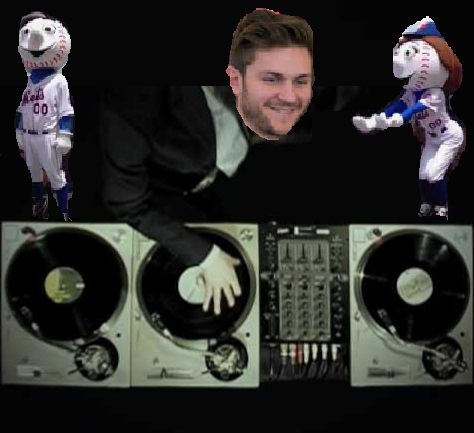 Trea Tuner – 8 years, 240 mil. Man, that’s a lot of money. Why, yes... Yes it is. Why? Umm… I’m anti-international draft. No, that’s not it. Trea is just that good. But he’s a SS! Umm… He’s a SS, and a 2B, and 3B, and a CF. That’s why. Positional flexibility, baby. It’s what the Mets are loving these days, and you figure you’ve got Marte for CF, Canha for CF, and this guy for CF, as needed. Big money, big player. I must note, I love me some Nimmo. I’d have signed both of them, if it was possible, but there is that pesky 325 Mil threshold to adhere to. Turner is that much better than Nimmo, is more durable, and brings a speed on the basepath that Nimmo doesn’t bring. Big cost, but worth it. I will lament the loss of a 2nd and a 5th, plus that mil in international money, but tis the price of bringing in a star. 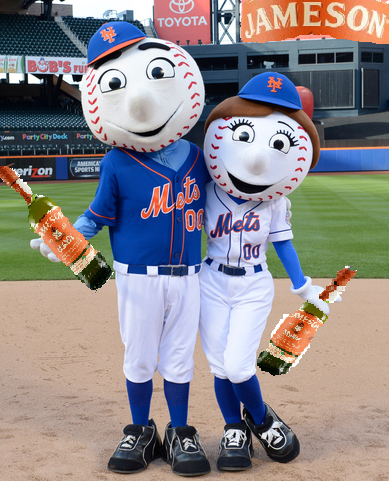 Jameson Taillon – 3 years, 36 mil. I thought about bringing the band back together and going for Bassitt, but he looked to be more expensive, and age is a thing. Going with the AARP plan was not what I wanted to do. So, I took a shot of on Jameson. His number improved with the Yanks, and he looks like a different pitcher with the changes he's made with pitch usage. I wanted a lefty in the rotation, and wouldn't have minded Anderson, but I thought he'd get and accept the QO, so oh's well. I only wanted him for 2 years, but let's be honest, had to add the 3rd year to get him on board.

Brad Hand – 2 years, 10 mil (4/6 split). I wanted Chafin here, but we have to make some concessions here and there. His numbers have normalized, and he’ll probably be cheaper. I need a couple of lefties in the pen, and here is one o’ them. 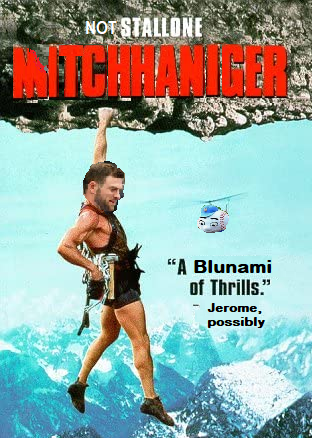 Mitch Haniger – 3 years, 24 mil (7/8/9 split). This is a bit of a splash for a 4th OF, but I like the power that he brings, could start in the COF if needed. He's had injury concerns, so a hybrid OF/DH could be good for him, and I wanted insurance on Baty. Not that I don't trust Baty, but should he falter, you can slide Turner to 3B, McNeil to 2B, and Haniger to COF spot. 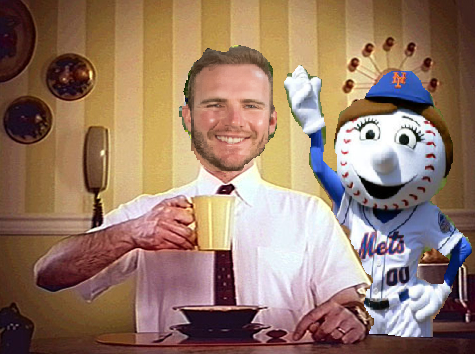 Pete Alonso – 8 years, 180 mil. Power is power, and Pete has impressed. He’s a leader, he’s embraced the heart of NY, and I’m rewarding him with an Olson-esque type deal. He still ain’t the Stache’ out there on defense, but he’s not a sheet of plywood, so, there is that. Buys out those last two arbs and gets 6 more years of control. 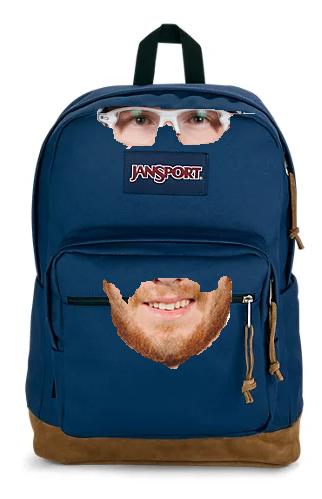 Ronnie Mauricio and Mark Vientos for Danny Jansen – Hey, what are you doing? Those them be prospects! Yeah, well, that’s a legit catching person. I’m not rolling with McCann/Nido next year, even with Nido being a finalist for the GG. Alvarez will certainly be involved in the catching duties, but there is this super weird concept that may be foreign to many, but it’s call injury. Have you heard of it? It’s where a player hurts themselves, and then can’t play. If that was to happen to Alvarez, who is probably slated to be more of a platoon C/DH, I want to ensure that the other half of said platoon is good. So, I’m paying big time for a guy that can be big time on his own. I don’t want to pay this much, but I’m doing it. Plus, if/when Alvarez DHs, I don’t want to stick in an automatic out. 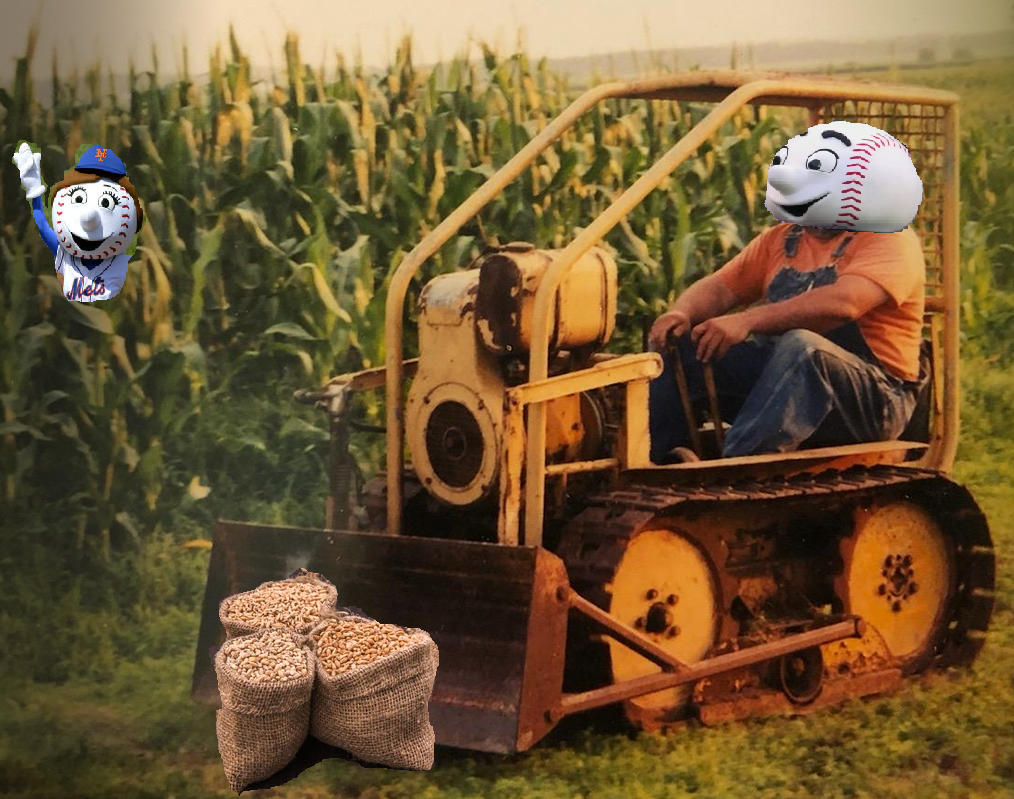 Eduardo Escobar and Dom Smith for Scott Barlow and Hunter Dozier – This is a reallocation of cost. Barlow is a good reliever with closer experience. Dozier is, well, he’s uh, a body. Can stand at multiple positions. To be honest, he’s the first guy off the island if Dozier was a guy on an island. And, he’s got an option. Woohoo! This is a move to move cash on this side, frees up money for KC (because they are kinda frugal, if you haven’t noticed), and adds a legit RP to the BP for 2 years of control. Building back a better BP slowly… For KC, it frees up cash now and next year, and if they can flip Escobar at the deadline, so be it. Dom just needs a new local, and KC has some excellent BBQ. 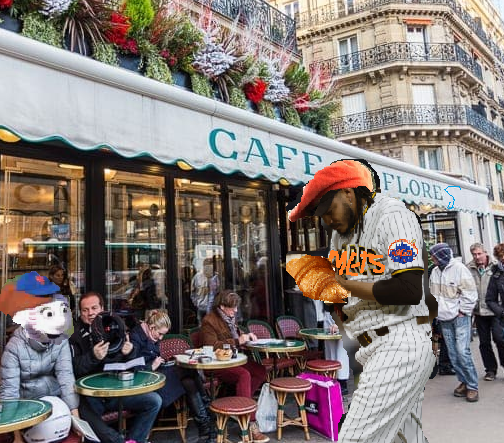 Dinelson Lamet for Darren Ruf and Khalil Lee – We love us some reallocation of resources here in IPA-land. And this is some more of the same. Dinelson in the BP has shown to be halfway decent, and while we take on some cash, it punts Ruf to the moon. Mets take on almost 2 mil, but that’s fine. 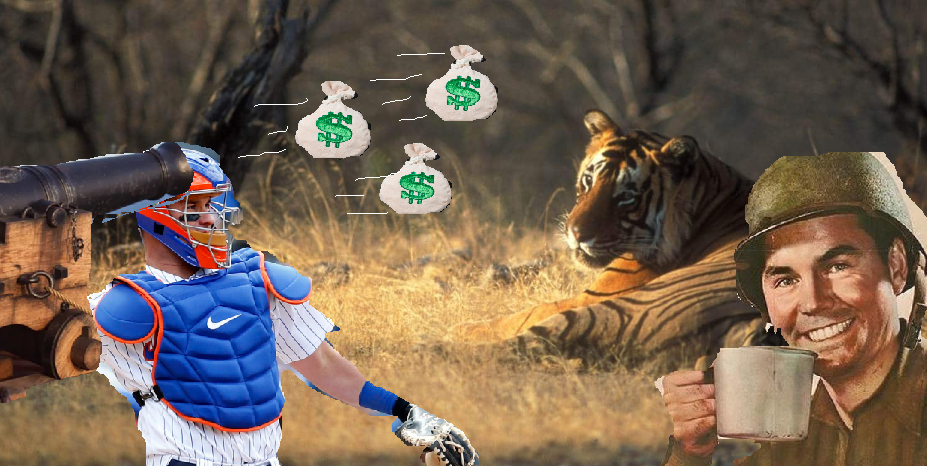 Joe Jimenez for James McCann, Daison Acosta, and 18 mil cash (9/9) – how does this make any sense? Well, Joe seemed to figure something out this past year. And Detroit is going nowhere, while having a young staff. With the Mets paying a bunch of McCann’s salary, while tossing in prospect, allows the Tigers to have a veteran catcher help mold their young-ish pitching staff. And Jimenez only has one more year of control, so Tigers might as well get something for him.

Ian Bedell for Tomas Nido – Can't have 3 catchers, especially without ones with options. Molina, of the never-ending Molina clan, that I’m told had a neck tattoo that had nothing to do with where he was born and liked to torture the Mets because he’s a giver has finally retired. Gold Glove nominated defense is a thing, and here I am moving Nido (because of Jansen) and pulling back a TJS recovering pitcher. Roster management 204, or 206, or wherever that class is located.

Mike Foltynewicz – I’m expecting absolutely nothing from this signing. Hoping for gold. Need some pitching to flesh out AAA.

Roberto Perez – need depth catching, so why not.

So, here is the final product. Many much dollars have been spent, but I like where the team is at. Turner is slotted in at CF for laziness. He could be at 2B, 3B, CF, McNeil could be at 2B, COF, Marte/Canha could be in CF. All I'll say, is there are options! The BP is built out a bit, with only Lamet and Jimenez slated for FA the year after. Same for the rotation with Carrasco hitting FA next year. Catching is robust. There is flexibility with whom can play where, along with some consistency in who is on the team to contribute. And in 2-3 years, there is the possibility to have a drop in cost with FAs dropping off the radar, and hopefully prospects filling holes. There are certainly some questions in relying on Baty and Alvarez, but I honestly believe that this is the Wright/Reyes type of reliance that we will need to see progress. If they don’t, welp, well, we’ll pivot if that happens.

I did reduce the minor leagues some in Mauricio and Vientos, along will reducing the international draft pool, but the strengthening of the major league team took priority. I'm not high on either and figured if I refused to part with any pitching prospects of note, and not move ARam or any of the latest draft class, it would take these two to get Jansen. Lost a 2nd and 5th round pick but gained a 2x4ths for Nimmo and Bassitt. 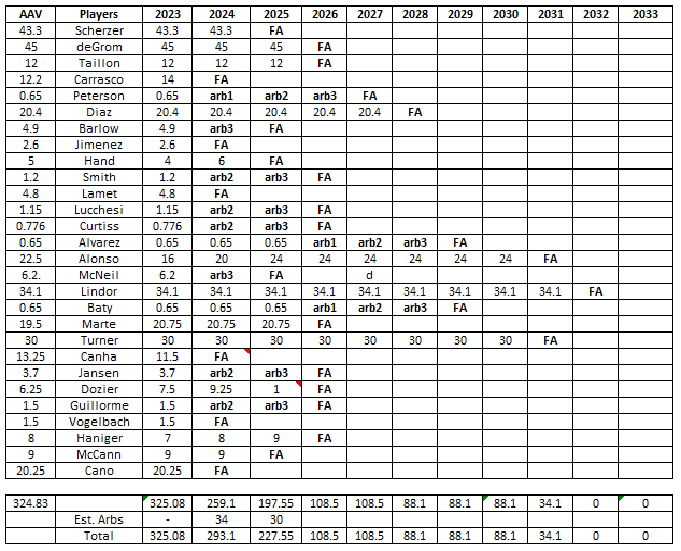 Lastly, I made sure to keep things in perspective to bring the money down in a couple of years. Based on my calculations, things start being manageable after Scherzer is off the books, and then flexible after deGrom. So, there is light at the end of the financial tunnel that is not a train.