Take it as you will; this is a stab at going beyond the simple "Mets play good!" to examine how much is backed up by underlying metrics in the small samples to date.

In the aggregate, the underlying metrics bear out that "Mets play good!" in both offense and pitching. As to individual lines, take them with the appropriate amount of salt. Taijuan Walker won't run away with a record-smashing ERA crown! 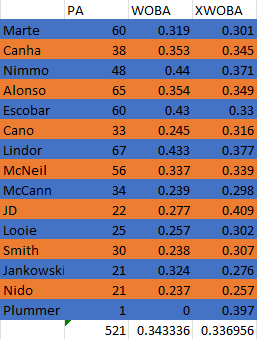 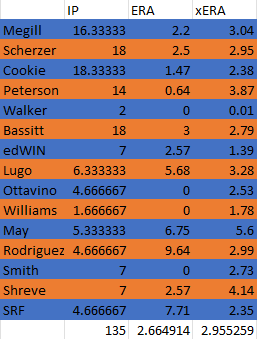 In each case the Mets are running a bit over expected performance, though the expected rates are still excellent.

Starling Marte is being dragged down by his very low average exit velocity and correspondingly low hard hit percentage, as is fellow Oakland import Mark Canha. In each case the player has a solid history of performance to suggest these small sample numbers will bounce back. Power after all is one of the traits that ages best. Assuming that the expected power materializes it's comforting to note that particularly in the case of Marte, the trait expected to age poorly (speed) is still strong.

JD Davis' poor start on the surface is belied by what appears to be astoundingly bad luck under the surface. His .409 expected WOBA he won't sustain but neither will he the enormous gap between that and his actual WOBA.

Dom Smith, though underperforming his expected WOBA, is still expected in the very early going to have a below average line by Statcast. Cano's expected WOBA works out to about league average. The now-beardless defensive wonder Looie (Guillorme) isn't as bad as he looks on the surface, his XWOBA at the time of recording matching last year's exactly (at least to 3 decimal places...).

Lindor is indeed rejuvenated, even if overperforming an excellent WOBA.

Turning from the batsmen to the pitchsmen:

The rotation as a whole mostly lives up to it's lofty billing even while overperforming across the board. Peterson, filling in for Walker, obviously isn't going to outdo Bob Gibson's ERA record by 200% but his expected ERA (3.87) and xFIP (3.75) are still solid postings. What kind of monster wouldn't gladly take a 2.38 Cookie (x)ERA?

The 'pen displays the typical reliever weirdness amplified by very small samples. Joe(l)y Rodriguez may not have the upside of departed Mikey Castro but if he keeps up that xERA the Mets won't be too displeased. Trevor Williams' line is clearly out of date as all my Excel work was put in last night before the numbers were updated. Drew looks like is ready to inherit the mantle of the good D. Smith on the team for realz. Shreve looks like his solid but unspectacular self. Trevor May under the hood looks unlike the self intended to be a not only solid but spectacular set-up man.