With Juan Soto on the market the Mets face a tough decision - whether to sacrifice a package that includes one of the best prospects they've had in a long while for possibly only 2+ years of a proven superstar who is only 23 years old.

It raises the question of how likely are the Francisco Alvarez and Brett Baty's of the world to fulfill their potential. You can never know for sure but there is one piece of research from Fangraphs that provides some perspective.

On their pre-season Top 100 prospects list, Fangraphs ranked Adley Rutschman their #1 prospect as a 70 FV prospect. On the same list Francisco Alvarez was #7 as a 60 FV. On their current updated ranking of prospects Alvarez is now ranked #2 while remaining a 60 FV.

Fangraphs also has Estimated Probable FV Outcome distribution graphs for their Top 100 prospects. From Kiley McDaniel on what FV grades represent: "Average is 50, above average is 55, below average is 45, plus is 60, plus-plus is 70 and 80 is just called 80 because it's so rare and special that it doesn't need another name."

Here's what the Probable FV Outcome graphs looked like for Rutschman & Alvarez which are found by clicking on the green "Expand" button at the bottom of their Top 100 write-ups. 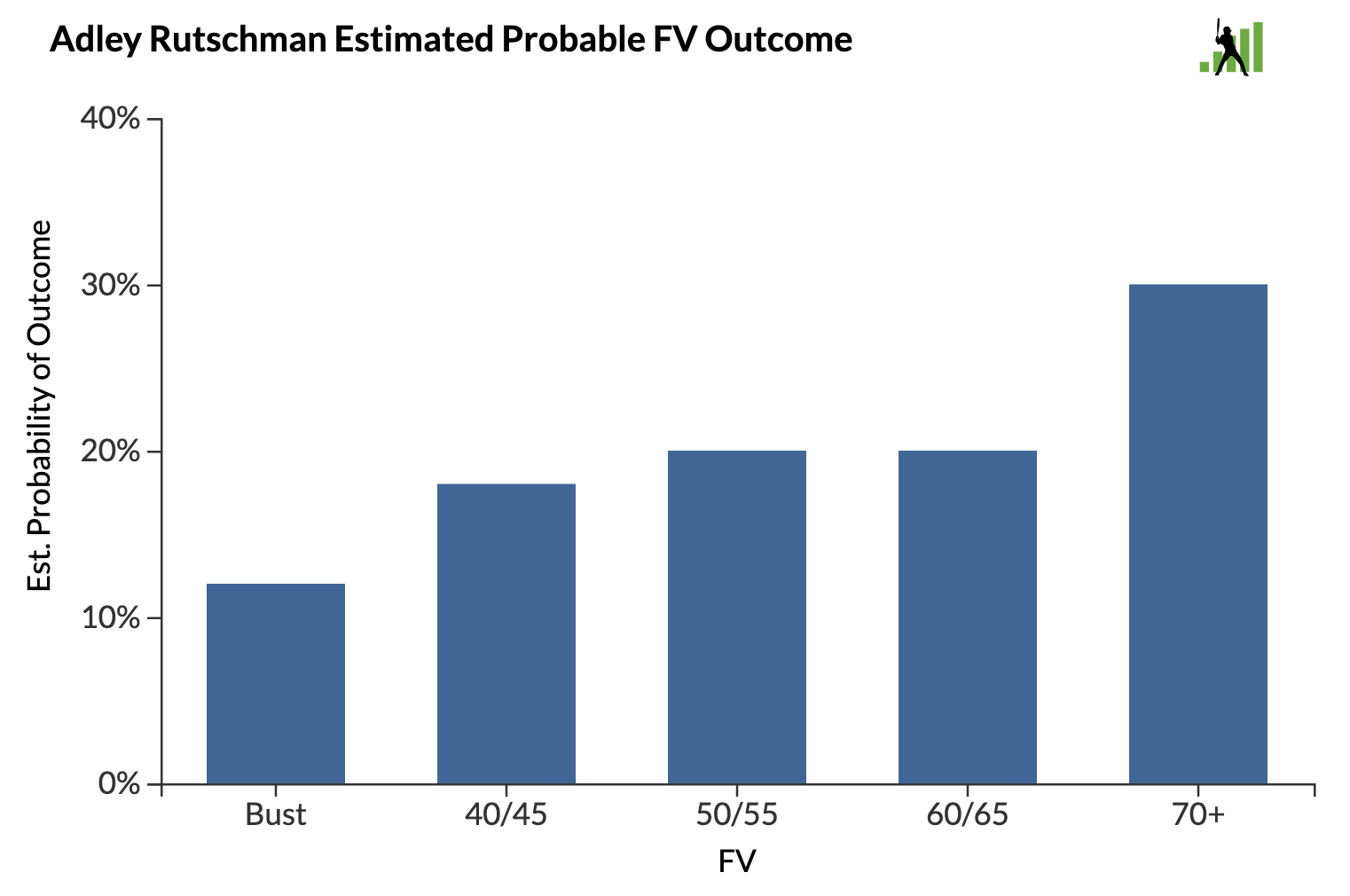 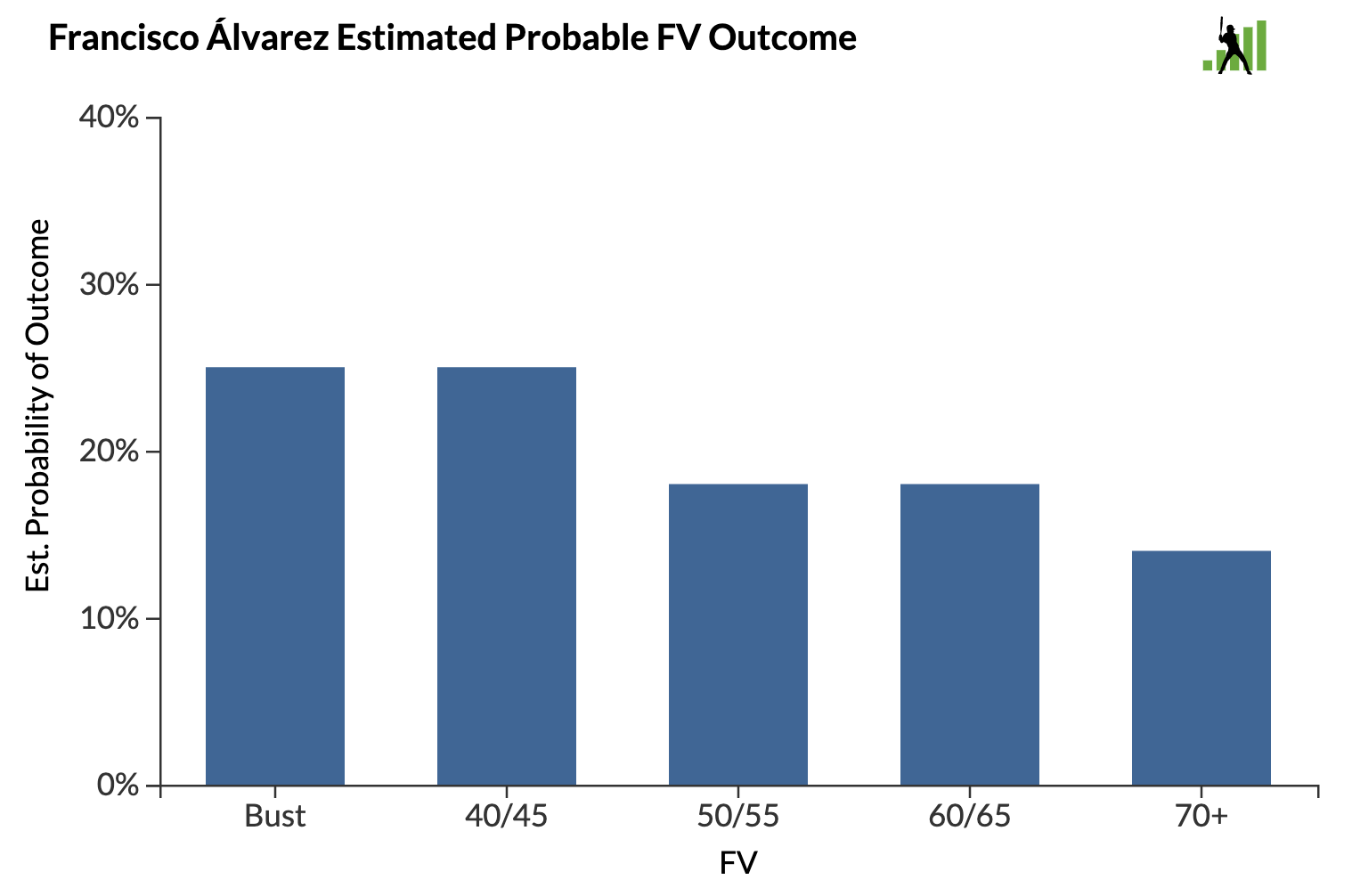 But that was pre-season right? He's got to have improved on those likelihoods since then. Well, maybe/maybe not. The updated Mets list was just published about a week ago and while Alvarez has jumped from #7 overall to #2, he remains a 60FV and has not yet found any semblance of his hit tool at AAA in a super-small 34 PA sample. His jump in ranking came from graduations to 4 of the 6 guys ahead of him. He jumped ahead of one guy previously ranked ahead of him.

What's this mean? My takeaway is that even the best prospects have a much higher likelihood of being "meh" than I would ever have expected. In the general sense it suggests to me that we should have less angst about trading prospects for the right guy. That doesn't mean I'm saying "Do the Soto deal dammit!" I can't make up my mind.

It seems fair to say that the odds of any of our current prospects sniffing Soto's career are slim. But they're not nil and how many would we have to sacrifice? Very tough call. But we shouldn't be surprised if in the end we wind up unimpressed by the current high-end guys that look like perennial future All-Stars.

How are these charts built? Again from Fangraphs: "Those numbers weren't set out of the blue; we based them on historical data on how prospects given 50-grade or higher FVs actually turn out in the end, and then applied our own judgements about the player.

People spend a lot of time looking at the right side of the scale and with good reason. That's where the fun is. That's where stardom lies, where team wins comes from. But too often, we ignore the left side, the role player side, the (gulp) bust side, where the data shows an overwhelming chance that none of this will work out the way some fans might hope."